Benesh (2011) describes her approach as using "hermeneutics and a specific method of dream interpretation to amplify images as symbols of transformation" (p. ii). I don't know about you, but I need a break from Benesh and serious stuff. But, I like this dream thing she's got going on, so let's jump on that bandwagon instead. Assume that Groundhog Day is just a dream, that you have but slumbered here watching it and all that Shakespearean jazz.

DOG ALERT: about 8 minutes in, a Scottie dog lamp in Phil's little half bath nook.

DOG ALERT: another Scottie dog on the dresser.

Dogs. Man's best friend, symbolic of loyalty to be sure. But, what else?

In dreams, Dream Moods tells us that they also symbolize "intuition... generosity, protection, and fidelity...

The dream suggests that your strong values and good intentions will enable you to go forward in the world and bring you success. The dream dog may also represent someone in your life who exhibits these qualities. Alternatively, to see a dog in your dream indicates a skill that you may have ignored or forgotten.

Phil Connors certainly isn't generous or, probably, loyal, pre-loop. But, he's got plenty of skills to learn in the loop. And, maybe Rita's that represented individual.

There don't seem to be any dogs on first pass in the dining room of the Cherry Street Inn... I spoke too soon.

DOG ALERT: there is a framed image of a dog in the... well, what would be the northwest corner of the room if it were inside the building used for the exterior. The toaster and whatnot are on a piece of furniture on the west side of the room. I only didn't notice the dog at first because a lamp was blocking it as Mrs. Lancaster approached.

Anyway, as I was saying, a dog in your dream could mean you are trustworthy and loyal or it could mean the opposite. shamanicjourney.comtells us,

this could be telling you that you need to be more like the dog. Ponder this. Do you need to be more loyal and trustworthy to family and friends? Or even to yourself? Study the characteristics of the breed of dog that has come into your life - e.g. is it a hunter, a protector, a companion or playful? Each of these qualities will give you insight into the qualities needed or present in your life.

We see no actual dogs in the film, though. But, so far, still on Day One, we've had two Scottie dogs, so what do Scottie dogs represent?

I went over to puppydogweb.com because a) it seemed like a reasonable resource to use and b) I used to work for the site and the profile in question might still be the one I wrote several years ago. Anyway, the profile for the Scottish Terrier tells us:

...the Scottish Terrier has a compact, strong body; short legs, pricked ears and naturally erect tail. Their face should wear a keen, sharp and active expression... They tend to be a one or two person dog and do their best as pampered pets. While a little stubborn, they still make loyal pets if given the chance to survey the scene before committing themselves. Scottish Terriers are very good watchdogs, but need to be kept secured as they have a tendency to wander. They can be snappy and bossy if left untrained, but will be a loyal and faithful pet if trained well. Scotties can be brave and confident, but are often independent. They can also be quick tempered, and do better with older children. They must be properly introduced if they are to be around any other pets.

I hope I'm not the only one that thinks replacing the breed with "Phil Connors" would result in a fairly accurate description of Phil's personality (pre-loop and early-loop at least).

As for their temperament, Scottish Terriers "can be sensitive as well. They have a high tolerance for pain, and can be aggressive with other dogs and hot tempered... If not socialized or trained, they will attack other animals." Phil just threw Chubby Man up against the wall because he asked the same question as yesterday. I don't think Phil is very well trained.

DOG ALERT: our second look at the dining room at Cherry Street and sure enough—I thought I remembered more dogs around the place—there are two more framed images of dogs—probably paintings—left of the doorway Phil uses to enter the dining room (i.e. the eastern side of the room. For the record, these look to be maybe Spaniels of some sort, but at an angle and passing quickly, I'm not sure. There's at least one more Scottie coming later so we'll stick with that breed for now.

As far as being watch-dogs, PuppyDogWeb tells us, "Scotties are very alert and aware of everything going on." This is Phil Connors for sure. I've written before about how quickly, for example, he recognizes the radio exchange on the second morning. It's not even the kind of thing he should have been paying much attention to the first morning, but he already even says the "chapped lips" line along with the DJs.

Outside a time loop, Scottish Terriers "should be exercised regularly... because they can become overweight if this is not done." This shouldn't be a problem for Phil, obviously.

On training, PuppyDogWeb tells us with a Scottie, it must be "founded on mutual respect. They are somewhat sensitive, and should have firm but positive training." Rita slapping Phil over and over—that doesn't qualify. Rita hanging out with him on God Day—that would.

Also, "This breed is very adaptable to most environments." It might take them 34 days or a thousand years, but they should adapt even to being trapped in a tiny hamlet in western Pennsylvania.

DOG ALERT: Nancy is in Phil's room, they're making out on the couch, so you probably don't notice the groundhog pillows—one of which is on display at the Woodstock library— 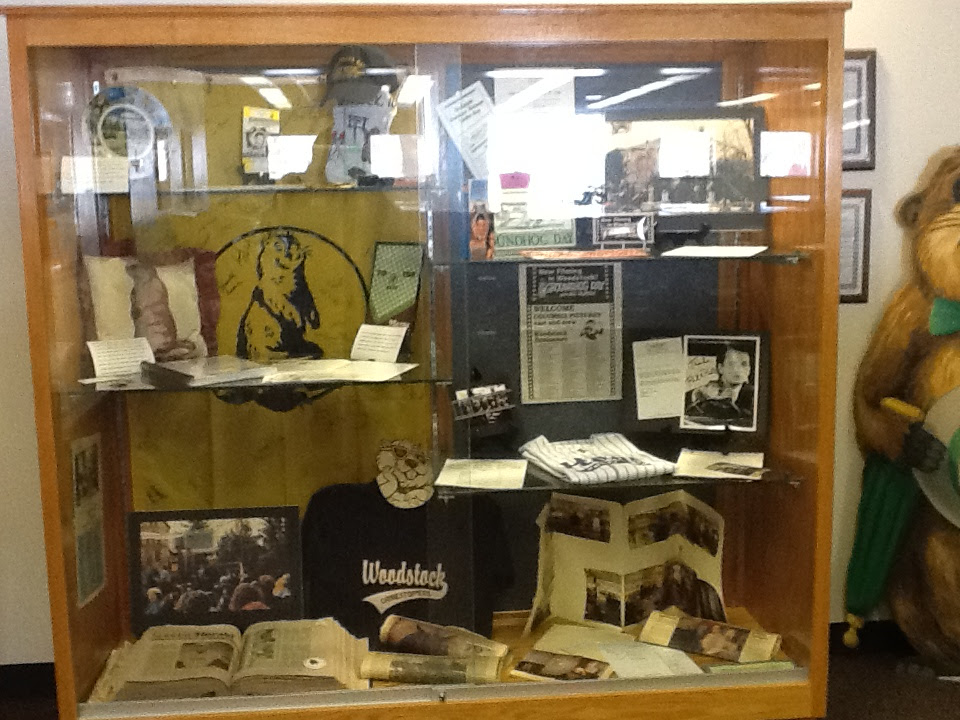 —or the... I was going to say dog lamp, but I guess that shows up later when Rita's there. The lamp Nancy turns on seems like it might be an animal of some sort but we'd be looking at its tail end so it's hard to be sure.

Oops, that was a FALSE ALARM.

DOG ALERT: Second marker for the robbery sequence is Phil predicting a dog bark. Let's assume the dog is happy. Dream Moods tells us, "To see a happily barking dog in your dream symbolizes pleasures and social activity." Phil is certainly seeking nothing but pleasure at this point.

DOG ALERT: after seeing the dog on the dresser from afar, we get to see the dog lamp in Phil's room when Rita is there... actually, no, not seeing it yet.

Separate DOG ALERT: when Phil grabs the Rocky Road from the window sill, there's a ceramic dog—looks like it might be a Cocker Spaniel—and some ceramic Dog bookends that are none other than Scotties.

Possibly DOG ALERT: There's also a weird lamp there, looks Egyptian, might even have a jackal head, so dog-ish. But, it's hard to be sure because the cloth Phil has draped over the lamp to get some mood lighting dangles in the way of the face.

Definite DOG ALERT: Left of the window where Phil has the Rocky Road is a painting of what looks to be a a poodle.

And, I may have invented the memory of a dog lamp.

By the way, Poodles, PuppyDogWeb tells us, "Steady, smart and loyal they will do anything an owner could wish for including obedience, shows, tricks, hunting and retrieving." Phil is certainly trying just about everything he can to get Rita's attention. The profile doesn't call Poodles attention-whores, though. It does say they "should not be left alone for long periods of time."

Huge DOG ALERT: Behind the old people sitting on the couch in the Jeopardy! scene and on the wall in the corner: multiple framed images of dogs, some that may be needlepoints and not paintings. And, by multiple, I mean at least nine, and I think the statues on the shelves in the corner are dogs as well. I think Mrs. Lancaster may have a fetish.

I'm wondering now if I did invent a dog lamp in my head, what does that symbolize for me?

Hot DOG ALERT: Buster's line when Phil's gone into the quarry: "Hot dog! There’s no way out ‘cept the way we came in. We got him now!"

Another glimpse of the dogs in the dining room when Phil goes to get the toaster—they are definitely some sort of Spaniels. If I had to guess—and keep in mind I wrote or re-wrote all the dog profiles at PuppyDogWeb several years back—I'd say one is an English Springer Spaniel. PuppyDogWeb tells us, "They have drop ears that can sometimes get mud and other substances stuck in their dangly locks" and "the Springer Spaniel is no choice for a meticulously clean house; they enjoy a good shake inside the house when they are wet." i.e. these dogs are messy, and this better glimpse of them—if we really want to read into the appearances of dogs in the film, and why the hell not?—comes as the story just got messier.

Oh, and English Springer Spaniels "are very enthusiastic." I kinda picture Phil trying to repeat the fall in the snow after the snowball fight like he's nothing but one of these Springer Spaniels, desperate for some attention from his human. After all, PuppyDogWeb tells us, "they must have human companionship" (emphasis mine).

When Rita gets up because midnight came and Phil didn't disappear, we can see the ceramic Cocker Spaniel and just barely see the bookends again. Still not lamp, though.

DOG ALERT: Another potential Springer Spaniel on Mary the Piano Teacher's mailbox. So, the dog fetish is not isolated to the Cherry Street Inn (no dogs seen inside Mary's house though). Also—and this is HUGE—a dog barks, and it definitely sounds happy, as Mary lets Phil into her house. Why is this huge and other dog alerts weren't? I don't think I ever noticed this dog barking before. Day 221 of the Groundhog Day Project and there are still new things to notice.

A passing thought, even though the psychiatrist scene is well behind me now: if the dogs do mean something, is it significant that Phil asks if the psychiatrist studied "veterinary psychology" or am I grasping at straws?

PuppyDogWeb tells us the Collie is "mild mannered and enjoys being with family, going through whatever it takes to get to its family." Phil just had to figure out who his "family" was, I guess. And, "Housebreaking is relatively easy for this breed" so Phil should have been able to make a Collie stay. I'm guessing the Collies he has been around saw his weak moral character and just didn't trust him to tell them what to do.

Anyway, that is about all there is for dogs in Groundhog Day. But, what Phil should have seen at some point was a dog chasing its tail. The aforementioned Dream Moods tells us that "implies that you are not handling a situation in an effective way. You are spending too much time on fruitless labor." Or he could have been buying a dog because that "suggest[s] a need for you to find companionship" or he could have been guided by a dog because that "suggests that you are having difficulties in navigating out of a situation or problem."

(Of course, Philip means "lover of horses" so maybe I should look for horses in the movie... nope, there are none. That was quick.)

And, yay for me getting through this entire entry without mentioning the obvious, D-O-G spelled backwards...