too early for flapjacks

Yesterday morning, the Groundhog Day Project woke me up. See, I'd written Friday's blog midday Friday--it was just going to be me sharing the text of the press release I put together. I didn't post it as soon as I wrote it because I had a couple of people read it because I'd never written a press release before. I also put together a good chunk of yesterday's (Saturday) recap entry on Friday because I knew I would be busy most of the day Saturday because of a practice speech tournament for nationals and the recap entries tend to be easy but take up a lot of time. So, when I woke up just before 6 AM Saturday (my alarm set for 6:12) having not posted any blog entry online on Friday I hurried to the computer and posted the Friday blog entry just in time. Technically, with the adding of topic labels and posting to Facebook and Twitter and reweeting it under my regular account, it happened after the 6 AM deadline. However--and this is an important however--since the blog was written and the film was watched... for the record, I will reiterate some important things:

The first rule of Fight Club is you don't talk about Fight Club.

The first rule of the Groundhog Day Project is, as stated on Day 31, "I will watch Groundhog Day from beginning to end" with the addendum: "I will not require that my eyes remain glued to the screen every second."

And, the second rule of the Groundhog Day Project is, "I will blog about the movie or something related to it every day as well." While that verb "blog" does imply I will post the blog entry, I will give myself the benefit of the doubt just this once. The entry was written with 16 hours to spare and just barely inched in under the deadline for posting. There will be no figuring out the punishment for failing to keep the rules today...

Would it be starting over?

Really, I'm just telling this little story because a) I thought it was awesome that not posting woke me abruptly just in time to do so; my internal clock has somehow attuned itself to Groundhog Day; and b) I didn't feel like dealing with Benesh again today...

I mean, I could mention how she suggests that the groundhog in Groundhog Day "goes from a literal sign with a cartoon drawing, to a live (and then murdered) groundhog, to a series of ice sculptures to a mandala of groundhog images surrounding Phil Connors' head like a 'halo' (Thompson, 1999)" (Benesh, 2011, p. 85). Of course, then I would have to point out how that doesn't make for much of a linear progression, however accurate the details may be.

Or I could mention how she says,

Which I called "silly" in the margin.

I could mention mistakes that got Xs:

I spent an entire entry already on how it is not "the striped clothing most often worn by Phil Connors" (p. 82).

She refers to "the Rachmaninoff variations [plural] that Phil learns to play on the piano" (p. 82). Handwritten after the X: "Phil only learns the 18th."

She calls the gazebo at Gobbler's Knob, in which Phil and Rita dance, "round" (p. 82 again). It is octagonal.

She says "the human Phil likes high places" in order to contrast that with "the rodent Phil [being] lowly" (p. 87). But, there is no evidence that Phil likes high places. He tells Rita, "I wish we could all live in the mountains, at high altitude" but he is obviously taking that detail from something she said in a previous date night moment we didn't get to see. And, the only other high places we might associate with Phil are a) his room at the Cherry Street Inn, which was booked for him by Rita and we are never told that he likes b) the cliff at the Nimtz Quarry, from which he flies to his death and, similarly, c) the tower atop the Pennsylvanian Hotel, from which he flies to his death. I'm not really seeing any evidence of liking any of those places.

She misquotes Larry's line after Phil drives off that cliff at the quarry on p.87 (which gets her 3 Xs, one for each word she gets wrong. She writes it as, "Larry's 'he may [might] be all right [okay]' followed by fiery explosion and Larry's 'well, [no,] probably not now."

She writes about references to eating the groundhog--Phil says he "had groundhog for lunch" and he reports about how the people of Punxsutawney "used to take the hog out and they used to eat it"--and she adds one more: "In another reference to ingesting the Other, Phil Connors once proposes toasting [to] the groundhog" (Benesh, 2011, p. 88). I don't know how it works in Benesh's circles, but whenever I have been present for a toast, we have not then eaten the person (or thing) being toasted. Still, there's a pink tab here labeled "eating groundhog."

But, I don't want to talk about Benesh today. I just wanted to share that story about waking up in a panic before my alarm because I enjoy bragging about just how crazy I have become. 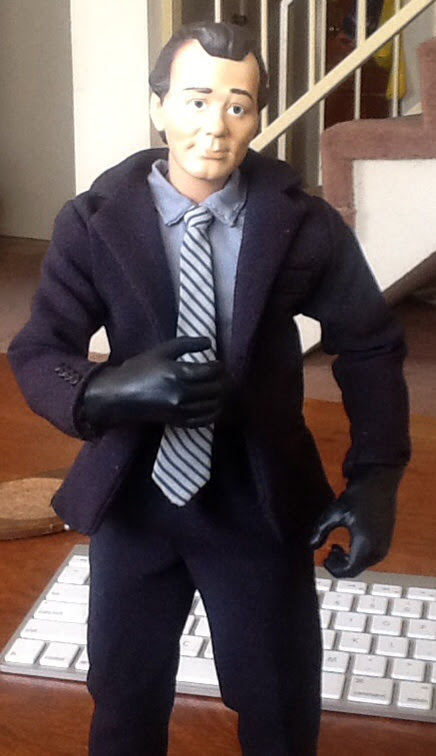 Today's reason to repeat a day forever: to will myself to wake up earlier and earlier until, against all logic, I wake before the time loop has even begun in the first place.