it always makes me think of rome

I finally watched È già ieri (aka Stork Day which is easier to type), the Italian remake of Groundhog Day, today. 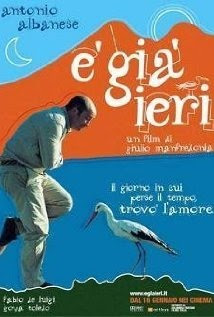 My initial thought: it was rather funny. I mean, I could predict most of where it would go (structurally, there are a few differences between Stork Day and Groundhog Day but the broadstrokes are the same) but it still managed to make me laugh a few times. I will have to watch it again and write a blog entry as it goes, provide some details. For now, know that while Stork Day is actually shorter than Groundhog Day, it's got some sequences added that don't come from the original.

For example, Filippo doesn't just Phil Connor the Nancy stand-in but a series of women and at least one man before he gets to Rita (named Rita in both films). He also helps Enrico (Larry) hook up with Marta (Nancy). He gets to know Rosa (the Mrs. Lancaster stand-in) a bit more than Phil gets to know Mrs. Lancaster--she's a widow--and goes to the market with her one day, which her late husband never did. Rather than just a quick sequence of Phil saving the Old Man, we see Filippo spend a little more time getting to know Carlos. Filippo also deliberately attempts to stay up all night, which Groundhog Day does not even imply Phil has tried.

An interesting detail for me, considering I'm leaning toward something to do with the portrayal of gender roles and gender relations in Groundhog Day for my Master's Thesis, was that the Italian Rita has a kid (she is a local biologist in this film rather than a producer come along with Filippo and Enrico) which alters some of the gendered issues involved slightly. She specifically refers to herself as "both father and mother" to her son, for example. Of course, I don't think this remake will play a part in my thesis when I get to it.

Anyway, I liked it. And, I intend to watch it again soon.

In the meantime, I thought I'd share a Google Translate-translated description of the film because it amused me. This is a two-paragraph description from mymovies.it:

Philip [Why does Google Translate translate names?], star of the small screen with its broadcast of popular science, is sent to Tenerife to film an episode of his program together with a shy cameraman. Arrogant and vain in reality as much as it appears condescending and loving on TV, Philip soon discovers that the island is linked to a kind of spell: every day, in fact, Philip wakes up and does the same acts, to discover that in fact that day never ends, and that it will be forced to relive forever on August 13. The situation disconcerting soon turns into an opportunity for inner reflection, but Philip will seize upon the opportunity given to him by fate?

Manfredonia [the director], now in its second work, choose not to take risks and, to underline the emphasis on the joke of the case (a theme already present in the previous year, and very successful, "If I were you" [The writer of this description is complaining that the remake of a film about events repeating copied a theme from another film; I think they missed something]), decided to remake the Italian dressing in Hollywood "Groundhog Day", the marmot replaced the title with a stork, it remains to say that the film is a comedy but enjoyable little personality, with an Albanian fit [At first I couldn't figure out what that meant, then I realized the main actor's last name is Albanese], as always when you do not have autodirigere [or that] (although Bill Murray is a ' other thing...), and yet another confirmation of an underrated talent such as Fabio De Luigi [who plays Enrico, this film's Larry].

How about another one? This one from the Italian Wikipedia. This one is also only two paragraphs but is a bit longer (and could use some editing, but I'd need to learn Italian). And, SPOILERS abound... not that it matters much because a) remake and b) hard-to-find remake.

Filippo Fontana is a famous popularizer television, specializing in zoology , bad-tempered, which in fact despises his job. The first scene of the film sees him in the studio while achieving a documentary about the marmot, direct quote from the original version of the film [This groundhog bit in Filippo's nature show is cute because a) his nature show is filmed on a fake set with clearly fake paper-mache-looking mounds that wobble when he bumps them, and b) he complains that the groundhog used in his show clashes in color with his suit], which takes place in the traditional Groundhog Day (the original title is in fact Groundhog Day) [No, no it's not. Nor is "Stork Day" a holiday, apparently, by the way]. Fountain [amusingly, his last name gets translated this time] must go for two days - along with the shy cameraman Henry [Enrico] - in a small island of the Canary Islands to make a report on a rare flock of storks , for which part reluctantly.

After making the service, can not take the ferry to go to the airport of Tenerife, because of a storm, and is forced to stop for a second night on the island. The next morning note an uninterrupted series of deja-vu and after a while you realize that everything that had experienced the day before yesterday, is being repeated relentlessly. He finds himself the victim of a space-time paradox: for he is always on August 13. First with amazement, despite several attempts to remain awake at night, or falling asleep in different places from the hotel room, and also to escape from the island in the morning itself (fails vaporetto), began to resign themselves [fun with translating pronouns] to the idea of ​​having to wake up every morning at 7 am with the voice of the same speaker of the local radio station that invites everyone to the evening party of the country, free from all inhibitions in behavior, not just food and cheap, it fits initially with a strong dose of cynicism, deciding each " day "to follow or not to follow the planned schedule with the crew in search of the storks, or spend the evening in a different way. Unable to have relationships with almost all the women of the island, after having taken away their secrets hidden for them to win so quickly [despite the horrible English here, this is a brilliant definition for what I call Phil Connoring], then find them all except monotonous: then comes the anxiety and suicide, complete with a massacre of the precious birds, even this paradoxically ephemeral. After this latest failure start to look at the world with different eyes clear that surrounds him, and everything that happens around you. He befriends, among others, an elderly gentleman who crosses outside the hotel in the morning and asked him a cigarette came to know that the same evening dies of heart attack, tries to prevent his illness, without ever getting his salvation. Resigned on the inevitability of fate, as well as allowing that the old man can enjoy his last day, look with more attention to the values ​​of life, beginning to discover, through Rita, the journalist of the TV crew [She's actually a biologist who lives on the island working as a sort of guide] in tow, residing in 'island, with which the true day before there had been numerous frictions, also exacerbated by the difficulty with which he had tried to conquer repeated during several days, however, without finding the same result obtained with the other women "boring" of the island. [All these words and this description jumps over an hour between that last sentence and the next one, just skips past most of the film] An ever deeper knowledge of his private life will allow him to open up and reveal his drama, although not convinced to be believed. In the evening when the two sleep together, in love with each other, the spell is broken and Philip, a man now fully renovated, wakes up in the company of Rita, August 14, in a rainy day which will to cope with a new life and, more immediately, the management of a herd of pigs purchased recklessly during an auction the day before.

The herd of pigs things is pretty funny, actually. See, there's an auction that we see twice in the film. The first time, Filippo bids on a clock more than the auctioneer is asking, then outbids himself when asked if he's sure about it, eventually bidding 10,000 euros for the clock, which he then breaks there in front of the auction crowd. The second time we see it is on Stork Day's god day, Rita in tow. Filippo tells her to bid against him because the auctioneer gets mad when he does it. And, he buys a small herd of pigs for 50,000 euros, telling the auctioneer to drop them off at his hotel the next day. He doesn't expect there to be a next day, obviously. But then, the loop is broken and he wakes with Rita in his room and his herd of pigs shows up in a truck not long after.

Today's reason to repeat a day forever: to remake Groundhog Day for every culture that has movies (and some of those that don't), translating it to whatever of their holidays makes the most sense.