I had in fact conceived this draft of the screenplay in seven acts. It seemed to me that breaking it up into smaller parts would make it easier to write quickly, and besides, it conformed to the way I was thinking about Phil and his predicament.

I knew that Phil’s life would proceed in stages, that there was a natural order to how his life would progress. The stages would be as distinct and definable as those laid out by Elisabeth Kubler-Ross in her stages of death and dying (denial, anger, bargaining, depression, acceptance). I have been quoted, by the way, as saying that Phil’s stages were the same as those defined by Kubler-Ross, but that wasn’t my intention. (Rubin, 2012, p. 84)

Rubin had Kubler-Ross in his mind, even if he didn't mean to ape them specifically. I think we all assume stuff happens in stages; we probably even did before Kubler-Ross published On Death and Dying more than forty years ago. It's the kind of thing we all know but when someone spells it out for us, it still seems like an epiphany. Konigsberg (2011) tells us the stages "have become axiomatic" and "they make intuitive sense" and she's right. People quote the five stages as if they are gospel truth, no questions asked. But, Kubler-Ross thought them up late at night after her book had already been commissioned; she never actually asked her original interview subjects about what was going on in their lives in terms of the five stages. Now, I don't mind that so much. Look back at your interviews, find some trends, label them--that seems perfectly reasonable. Konigsberg (2011) points it out though, and also points out "there was no specific data set to contradict, no research protocols to follow."

And she wasn't talking generally about grief either, and certainly not about dealing with just any major change--though we apply the stages to just about anything. Kubler-Ross was specifically "writing about facing one's own death" (Konigsberg, 2011). To be fair, Konigsberg quotes Kubler-Ross from an interview in 1981, saying the stages apply to more than just one's own death; "Any natural, normal human being, when faced with any kind of loss, will go from shock all the way through acceptance," she said. Yale researchers, cited in Konigsberg, tested the stages and found that acceptance, Kubler-Ross' last stage, did not actually come so late in the process. Konigsberg (2011) writes, "the resulting study, published in the Journal of the American Medical Association in 2007, found that most respondents accepted the death of a loved one from the very beginning. On top of that, participants reported feeling more yearning for their loved one than either anger or depression, perhaps the cornerstone stages in the Kubler-Ross model."

Another myth about the stages that Konigsberg debunks, so to speak, is that "Anger is a necessary stage of the healing process" (Kubler-Ross' words). Konigsberg writes:

But, I'm not here to debunk Kubler-Ross myself. Whether or not the stages of grief exist, Groundhog Day still has stages to it. But, they aren't quite the same as Kubler-Ross' stages. Danny Rubin (2012) explains further:

There are some similarities here to the stages of death and dying, but the stages aren’t and wouldn’t be identical because Phil wasn’t encountering death. Just the opposite.

Interestingly, though, Phil did encounter the “death” of his old life when he first faced the repeating day. Here denial, anger, bargaining, depression, and acceptance do work their way through until Phil reaches the next stage, which is basically “So I’m stuck here. Now what?”

In fact, every stage of Phil’s life is like a lifetime itself. Each stage eventually comes to an end and Phil encounters a death of sorts, after which he experiences a rebirth as a new life, or stage of life, begins.

Even in the stage where Phil is suicidal, you could imagine that he would emotionally approach his inability to kill himself with denial (“I can’t believe that didn’t work!”), followed by anger (“Oh, come on!”), bargaining (“Please let me die. I’ll do anything!”), depression (“I really can’t escape this life?”), and acceptance (“I’m immortal.”). Although I didn’t exploit this progression directly, why else would Phil conduct repeated suicides unless he was going through some sort of process? Otherwise he would only try once. (p. 85)

Of course, Kubler-Ross' stages weren't as neat as we like to assume they are. Just look at this diagram from the Elisabeth Kubler-Ross Foundation website: 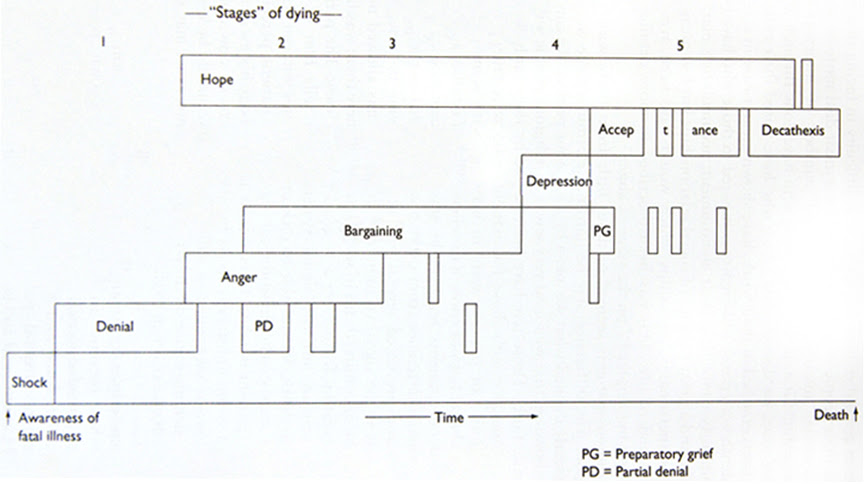 Stages are not separate and self-contained. They are broken and interrupt each other. Rubin got that, I think. Phil's stages are not detailed enough to demonstrate what Rubin is suggesting though. Still, separate from Rubin's original seven-act structure, Daughton (1996), as I mentioned yesterday, does find in Groundhog Day "seven steps toward Phil's "transcendence":

(1) "cynicism," (2) "alarm," (3) "hedonism," (4) "depression and anger," (5) "denial and avoidance," (6) "resignation," and (7) "acceptance and growth" (p. 145-149). She likens these steps to Kubler-Ross's stages of death and dying which are denial, isolation, anger, bargaining, depression, and acceptance (p. 151). Kubler-Ross is also mentioned by Harold Ramis in the DVD's Director's Commentary, and the steps are also similar to the Gestalt Cycle of Experience (Wheeler, 1998) which will be discussed later, in that each step in the process can be seen as an incremental mini-transformation and a fractal that reflects the whole, overarching transformation. (Benesh, 2011, p. 21)

Note, of course, that Daughton's first step comes before the time loop even gets going. She describes Phil Connors as a "miserable cynic: self-centered, abrasive, and deservedly friendless... [He] displays the entitlement of a white male professional who assumes that Power is his birthright" (Daughton, 1996, p. 145). Phil is a man straight out of bell hooks' "white supremacist capitalist patriarchy" except he really doesn't seem to have much power. Sure, he's got a good job, he's a local celebrity, but though the film doesn't present evidence of as much, I totally buy Daughton's contention that he is friendless. And, while Ramis' second revision of the screenplay implies that Phil has made his way (sexually, if not with some actual dates) through a lot of women just at the station--see Rita's line just below--Phil doesn't "have time for a real relationship right now" (Ramis, 1992, p. 7).

RITA
I see. You know, Phil, you can charm all the little P.A.'s at the station, all the secretaries, and even some of the weekend anchors, but not me--not in a thousand years.

Daughton's second step, alarm, comes after the time loop gets started. "The audience can see that Connors's arrogance is debilitating," Daughton (1996) says, "for the time loop has shaken his confidence in his perceptions of reality, but not in his values. Rather than search his own soul for a solution, he seeks advice from two down-and-out men in a bowling alley bar" (p. 145).

Daughton is, obviously, creating her steps with the content of Groundhog Day as her basis, rather than fitting Groundhog Day into some existing set of stages. But, then again, that is what Kubler-Ross did as well, putting labels onto the stages she saw with her interview subjects. One doesn't have to be a cynic first in order to find "transcendence" is my point. One probably doesn't have to take a turn into hedonism--Daughton's third step--although even Hesse's Siddhartha has his liaisons with Kamala. Daughton (1996) makes an interesting point about Phil's hedonistic stage--what I used to call his adolescent stage... not to imply that I wouldn't still call it that; I just cannot remember using that phrase too recently. "He remains addicted to agency (masculinity), and seeks Power in subversive ways" (Daughton, 1996, p. 146). I'm not sure that Phil ever really gives up agency. Even when he's killing himself, even when he's rushing around town to help other people, he is relying on his own agency to act. Even at his most resigned, Phil is never passive. Dauhgton argues that Phil "subverts virtually his entire self, performing rhetorical contortions, in order to convince Rita, during a twenty-four-hour period of time, that he is her 'perfect guy'" (p. 147). But, I don't buy this one. As I said, Phil never gives up agency. And, I don't think he gives up his self at this point either. The contortions, the pretensions--those are part and parcel of who Phil is. He is a guy who maybe has no real self-esteem but instead just fakes it all the time to make people like him. When someone like Rita doesn't like him, he reshapes himself because he cannot realistically reshape her.

On the other hand, arguably, what he manages in a way on "god day" is to do just that, though--reshape Rita. By letting her in on his secret and providing evidence, he has altered Rita enough that her "perfect guy" is no longer a relevant measure by which she will be looking at him. It doesn't last into the next resumption, but still, for that brief time, he has reshaped Rita. And, only then can he really try to reshape himself. The contortions on "date night"--those were shallow. The changes in Act Three--those are deep.

On her fourth step--depression and anger--Daughton (1996) says: "His depression is the logical result of having no usable past and no hope for a long-term future in which he affects events: He knows that he can make no 'progress' in time or space or human relationships because each day he will begin again" (p. 147). The awesome thing about Phil's depression, especially the way Daughton describes it, is that it is a universal thing. Time loop or not, she describes a lack of real agency. As I already said, Phil doesn't give up his agency, but he does, to an extent, lose it. And, so do we when things don't go our way. In 2000, I had a good bout of depression brought about by a breakup--

(You didn't expect me to leave myself out of this entry entirely, did you?)

--and felt I had "no usable past" for a usable past would have gotten me to a present I liked. And, I had no "hope for a long-term future in which [I] affect[ed] events" because I felt powerless. I was less mature than I am today. That one relationship was too important to who I thought I was at the time, so with it over, it hurt. And, I felt like all the effort I had put in, all the agency I had expressed, was for naught. Part of the reason I don't express such agency most of the time anymore, at least when it comes to romantic relationships. Phil "turns inward, stays home... He doesn't get dressed or leave the house, and lies around in his pajamas drinking Jack Daniels" (Daughton, 1996, p. 147). Leave aside the Jack Daniels, and well, been there, done that. And, I would wager that most anyone reading this blog has been there as well. Maybe not for an extended period, but we've all been there.

And, it is after 1 AM, this blog entry has passed 2000 words--my usual aim is at least 1000. While I have not finished with Daughton's steps toward transcendence, nor really come back to Benesh at all--I had intended to jump ahead to her references to the "Gestalt cycle of experience" as it relates to the stages--I am tired and I must sleep.

Today's reason to repeat a day forever: to not write about things that seem like veiled references to the present... though really, everything is always about the here and now.