Benesh (2011) comes to a subsection of a subsection of chapter two on the Gestalt cycle of experience on page 45 of her dissertation. I'm only jumping ahead because she referenced it back on page 21 (where I left off). "The Cycle of Experience," Benesh explains, "presents a metaphor of 'metabolism' for taking in and expanding one's boundaries by exchanging boundaries with another entity" (p. 45). She explains further, "each point on the cycle is a microscopic reflection of the whole, like a fractal, and cycles of all sizes are presumed to be going on continually at interpsychic, interpersonal, group, and system levels. We can't attend to all of them at once" (p. 46). I'm reminded of Bacha (1998) who was once a mainstay of this blog. Bacha, at one point asks, "So, how does the mind work?" (p. 384). The answer is not a simple one. The immediate answer is this:

A starting point might be to differentiate between three aspects of this initial question. Or, to bring in the concept of time, three sub-moments:

She's talking about how we experience each moment, how we create in each interaction with others, and with ourselves, we build our own version of reality around us... sort of. That's not really Bacha's point, necessarily--her interest is more in how a "couple" exists within this framework; the framework is more a given than anything explicit.

Benesh (2011) compares this fractal cycle of experience to Kubler-Ross' stages of grief (p. 21). But, rather than going into any depth on Kubler-Ross, Benesh instead references Daughton, which is where I left off yesterday, in Daughton's Step Four - Depression and Anger. Daughton's steps, I will point out again, were formulated around the structure she saw in Groundhog Day specifically. She did not attempt to map the film onto a preset list of steps... well, that isn't necessarily true, as she specifically says, "Connors' transformation parallel the seven gates through which Inanna, the upperwold goddess, must pass in her journey to surrender to the netherworld goddess, Ereshkigal (Perera, 1981)" (Daughton, 1996, p. 145). Maybe she set out to line up Phil's journey to that of Inanna, maybe she just saw the similarity afterward. I have only the published version of her piece, so I cannot be sure. However she came to it, Daughton puts the "rhetorical structure of Groundhog Day in terms that express the changes that Phil Connors must go through to achieve transcendent wholeness" (p. 145). But, she does say,

several of the steps in Connors's development correspond roughly to Elisabeth Kubler-Ross's five "stages" of death and dying: Denial, Anger, Bargaining, Depression, Acceptance (1975, p. 10). This is no coincidence, since Connors experiences a loss of control that resembles dying... The loss of control, and loss of ego, that Connors experiences actually resembles not only dying, but living with a higher level of consciousness, and that is one of the points of the movie. Connors denies that uncontrollable aspect of life until the recognition is forced upon him. Similarly, Kubler-Ross views dying, and coming to the acceptance of death, as "the final stage of growth" (1975, p. 145). (Daughton, 1996, p. 151-2)

I already mentioned yesterday how this isn't necessarily factually true--that acceptance comes at the end. Konigsberg (2011) describes (though not in enough detail that I could find the study in question) a study published by the Journal of the American Medical Association in 2007 that "found that most respondents accepted the death of a loved one from the very beginning." Of course, Konigsberg also mentions that, however we might reference Kubler-Ross generally, Kubler-Ross was specifically writing about facing one's own death...

And, I get sidetracked. Daughton (1996) fuels my potential focus on gender (in my master's thesis, for those not keeping up) in her section on Depression and Anger, when she writes,

He has almost reached the depths of his descent, but rather than accepting his depression (the dark goddess) he fights against it, adopting an outward focus on action, stereotypical of males in patriarchal society. (p. 148)

On the one hand, I explained yesterday how I do not think Phil ever gives up agency even when he chooses to die so I agree to an extent with what Daughton is saying, but on the other hand, I think the suggestion that he "fights" against his descent is contradictory. He embraces his descent just as much as he embraces his hedonism, just as much as he embraces chasing Rita. For Phil, whatever is now is everything. He can avoid dealing with the faults of his persona and his psyche as long as he can keep spending all his energy on outward pursuits. And, his descent into depression and eventually to suicide is no different. 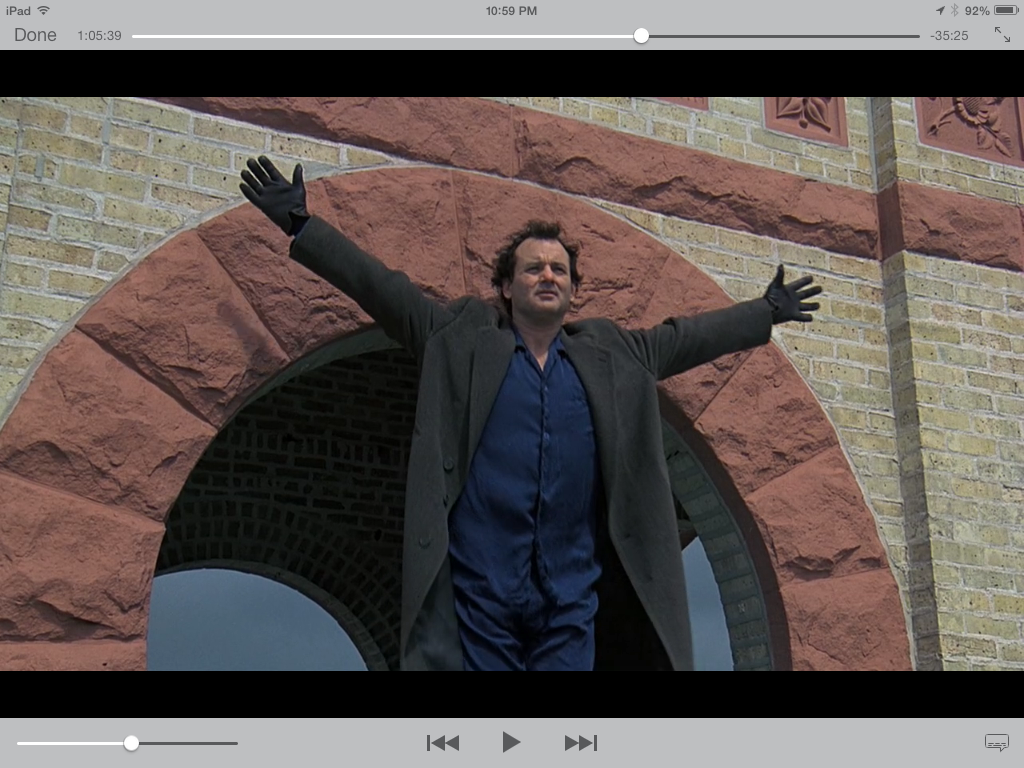 Daughton's Step Five is Denial and Avoidance. Again, I must nitpick. Daughton attempts to say that Phil is denying the larger situation here, but in her description she suggests a denial of the new status quo, his inability to die. I would grant her the latter but not the former. She writes, "His active solution has not worked; he is at a loss because acceptance and willing submission are not in his emotional vocabulary. Those are qualities he associates with the feminine, the Other" (p. 148). Again, I find myself torn between agreeing with Daughton and arguing with her. Yes, Phil's "emotional vocabulary" does not include "acceptance and willing submission." But, I must reiterate, he is not here denying the overarching situation, i.e. the time loop. If anything, his denial thereof already happened and Daughton lumped it together with Alarm as Step Two. In this case, I think Kubler-Ross' order works better. And, I would put his attempts at suicide--

(It occurs to me that this phrasing is misrepresentative of what happens. Phil does not attempt suicide. He commits it. He succeeds. It just isn't permanent.)

--quite simply into the Depression stage. Phil's journey, as we see it, does fit the Kubler-Ross model. He denies the time loop--quite evident by, if nothing else, his choice to take that second shower knowing the water will be freezing.

(An interesting difference there between Phil Connors in Groundhog Day and Filippo Fontana in È Già Ieri (the Italian remake): Phil goes right into the shower when he should know it will be too cold but Filippo on Day Two is already precisely timing the moment the shower would turn off and he does so from outside the shower, with no shampoo/soap left on him.)

Phil's Anger doesn't last long (nor did Denial); after all, the best part of the story in Groundhog Day is the Bargaining stage. That stage encompasses the adolescent/hedonistic segments along with Phil's pursuit of Rita. And, the failure to snag Rita, presented dramatically with a series of eight slaps in a row, drives Phil into Depression. Acceptance is about to come on my television screen--Rita was just throwing cards at the hat and tomorrow morning Phil will wake with a new lease on time loop life. He won't chase after empty or shallow pursuits. Rather, he will try for better things, make life better for anyone and everyone he can.

And now, the speech as Rita dozes. I used to pause my typing on this blog and listen to this thing just about everyday. My romantic side rearing its head...

What I wanted to say was… I think you’re the kindest, sweetest, prettiest person I’ve ever met in my life. I’ve never seen anyone that’s nicer to people than you are. The first time I saw you, something happened… to me. I never told you, but I knew that I wanted to hold you as hard as I could.

I don’t deserve someone like you. But if I ever could, I swear I would love you for the rest of my life.

That combined with his question on the morning after--"Is there anything I can do for you today?"--I think that's the kind of thing my romantic side likes. I'd like to think I could find someone, again, that would change me like Rita changes Phil. Problem is, I also generally don't think I deserve someone who could do such a thing. My cynical side and my romantic side hang out a little too close to each other.

Though I don't think Daughton's "Steps" fit, I like her label for Step Six: Resignation. There is a distinct, and deliberate, tonal difference between Phil on god day and Phil when he wakes up fully in Act Three. The switch could easily be described as resignation turned to acceptance. God day is all about Phil showing off, proving what's going on. Pursuit of Rita is left behind. Daughton points out how Phil's "sexual aggressiveness [is] gone [and] they sit companionably on his bed" (p. 148). I have often argued that it is not Phil's pursuit of Rita that fuels his transformation, but it certainly stems from his ability here to experience Rita as a fellow human being and not simply an object to pursue.

Daughton's seventh and final step is Acceptance and Growth. "The next morning at 6, Phil wakes up alone," she writes. "Rather than being daunted by this, he gets out of bed purposefully, with the sense of heroic mission that Dyer (1992) says distinguishes the highest path to enlightenment" (Daughton, 1996, p. 149). And then, Daughton sides with me. "He begins using his knowledge in positive ways, to help other people. This in itself is proof that he was not simply being nice to Rita in a clever attempt to get out of the time loop" (p. 149). Unlike Bacha (1998) who says, "Phil thinks that he must find a way of making Rita choose him and surrender to him completely. He thus becomes the admired one in the community" (p. 396). The first sentence, for the record, is Bacha referring to Phil's "second seduction" of Rita, not his more objectifying pursuit earlier. Daughton (1996), on the other hand, says that Phil "has gone from viewing a woman as a sex object to be possessed, used, and discarded, to seeing her as a role model, to be respected, admired, and emulated. He has shown sincere appreciation for Rita and the qualities he once ridiculed" (p. 149). Phil has accepted his place in the loop and, inspired by Rita, driven by Rita, however you might want to phrase it, turns his agency to the betterment of the people around him rather than his own pleasure.

While, I adopted Kubler-Ross' label there, you can see how this is not Phil dealing with his own death. His own death has come and gone. What Phil is choosing by accepting his place in the time loop is life, not death. He has accepted--like the cinematic Christ-Figure he is--an eternal life serving others.

Today's reason to repeat a day forever: to serve anyone and everyone around me, to make the world a better place at the end of the day than it was at the beginning... which really should be my goal every day. It should be the goal we each have every day. Anything else is just wrong.