if you don't believe me take me by the hand

If we took Benesh (2011) at face value, then we would have to assume every film in which characters have hands is somehow using those hands to mean something. I don't even think Benesh is all wrong in some of the symbolism she describes in Groundhog Day but she chooses such simplistic things--hands, snow--that the choices are more banal than meaningful.

If there were closeups of hands--to be fair, there are one or two--or characters talked about hands or their hands were particularly meaningful in context of the story... except Benesh doesn't want us looking to the narrative; she advises (by way of Izod (2000) citing Hillman (1983 presumably) that we "focus on an image-oriented reading versus one that rushes, as it typical, to narrative conclusions" (p. 63). But, the problem here is when looking at images pushes us not just past the narrative but into an entirely different universe from it. She wants to look at the film in terms of Jungian psychology and dream interpretation. Okay, fine. But, if I had this dream, I would not assume there was any significance to the hands. Nor would I think that the color white has any particular significance (though I would assume it was important that the dream was set in midwinter).

I noticed something recently that made me wonder about the deliberate placement of bars throughout the film--a topic Benesh hints at with her focus on lines. Gilbey (2004) also notes the bars. For example, he calls the pink stripes on the wallpaper in the Cherry Street Inn's dining room "Candy-coloured prison bars" (p. 35). Benesh uses Gilbey to back up her own references, including things like the blinds at the Tip Top and in the neurologist's office. My response to the blinds thing is simple: blinds are a reasonable thing to put over a window you want to have (you know, for realism) but don't want the audience to actually get distracted by. For example, the neurologist's office amounts to two walls, the light panel for the x-rays on one and a window with blinds on the other. Those walls are not actually part of a building but a cover set inside a warehouse. Those blinds give us the verisimilitude of it being a real place while completely blocking our view of its nonexistent exterior. Similarly, the frosted windows in the hallway and stairs of the Cherry Street Inn sets give us a sense of natural lighting and a world outside but also keep us from being able to look past the action to events outside.

My response to the lines/bars issue altogether comes in two parts. Part one: lines, both vertical and horizontal are ominpresent in the modern world. The wood panel wainscotting in Phil's room has vertical lines, for example, but then the upper wall has a floral design. Should we read into one while not reading into the other? Or should we assume that these just happen to be the details of that particular set? Out on the streets of Punxsutawney, there are vertical lines and horizontal lines everywhere, and what about that brick road? That has got to mean something, right? Or maybe it's just the road that happens to be in Woodstock, Illinois where they filmed. I mentioned in one of my first times dealing with Benesh in this blog the supposed line from Hemingway about The Old Man and the Sea and the symbolism everyone finds in it:

There isn’t any symbolism. The sea is the sea. The old man is the old man. The boy is a boy and the fish is a fish. The sharks are sharks, no better, no worse. All the symbolism people say is shit. What goes beyond is what you see beyond when you know.

My response before began with this: "On the one hand, I think Hemingway is blatantly lying here." If nothing else--if that novel is merely a surface-level story about an old man struggling to catch a marlin--the old man carrying his broken mast around afterward is the most obvious of Christ-Figural symbols that if Hemingway didn't get it himself, there had to be something seriously wrong with him. However, as I said before, "On the other hand, looking for symbolism in commonplace objects might be pushing it sometimes." And, I think both Gilbey and Benesh are pushing it a little with the stripes thing. Hell, watch the blu-ray version of the film and you'll see so many lines and textures, even in costumes, that all of these things become meaningless...

But, I was thinking about Anderson's Fudge Shoppe in the film not that long ago. Like the Tip Top Cafe, Anderson's was a set built on location for the film. It's only in one, very brief scene--on "date night" Rita (presumably) eats fudge and turns down white chocolate, plus there's a nice deja vu joke. I wondered, was there no candy shop anywhere nearby that they could use for the film? Why build Anderson's just for that one scene? One scene, much like the restaurant scene in which Buster chokes, could be filmed in an existing location more easily, one would think, than building something anew. The Tip Top, for comparison, is used repeatedly so the film crew needed complete control over the set. The thing is, on the walking tour in Woodstock, Bob Hudgins mentioned how they built up the storefront across the street from the Tip Top to look like a pharmacy, complete with interior because, you know, blinds don't hide everything. And, the film never even goes inside that pharmacy, nor did they intend to. That was just the production fixing up an empty location that they knew would figure in the background of some of their shots. So, there is practical reason to build something like Anderson's, so between the one scene inside, the rocky road with the Anderson's logo, and Anderson's itself visible in the background in a couple scenes, it adds to the reality of the larger location. And, it creates a insular little world in that square, which is a big part of why the production picked a town square town in the first place.

And, I didn't even mention why Anderson's links to the topic of the bars/lines. The inside candy shop decor includes notable stripes on the walls; that's pretty much it.

But, back to hands.

There is an interesting thing that comes from Benesh's (2011) focus on hands in terms of the development of Rita's interactions with Phil. I think we can skip past the detail of the hands to the larger acts involved, but let's see Benesh's version first. She writes,

Rita repeatedly smoothes Phil's lapel before the groundhog ceremonies, slaps him nine times, flips cards into a hat with him in his room one night, reaches to help him down from the stage at the bachelor auction, and reaches over him on February 3 to turn off the alarm clock. (Benesh, 2011, p. 74-5) 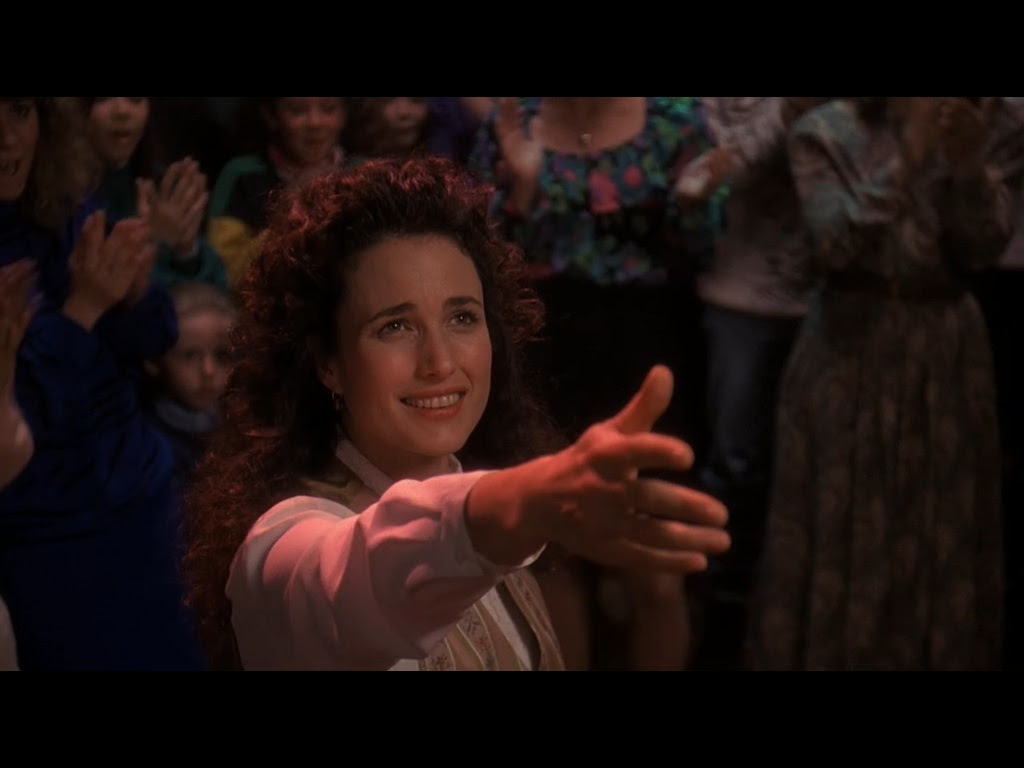 1) I've already pointed out the mistake with "nine."

2) If I wanted to be even more of a smartass, I might wonder why Rita playing with her food in the "French poetry" scene isn't on Benesh's list.

3) I do think there is something here, I'm just not sure we need to rely on hands to see it. In fact, doing so skips us past some important steps. Let us look at this sequence in Benesh's terms first then move beyond that. First, if we go by just the actions Benesh mentions, we can get something like my handwritten note on page 75: "motherly-->hostile-->accepting?" It doesn't make for an obvious linear progression. Then again, neither does life much of the time. But, for a curvilinear progression, we could put these elements into it. But, it wouldn't tell the whole story of the progression of Rita's interactions with Phil. We would miss out entirely on why she is hostile, for example. The near seduction is just as important for our understanding of Rita as it is for our understanding of Phil. And, her staying with him on "god day" is better represented by her falling alseep on him, I would say, than by her throwing cards into the hat (nevermind that while the hat and cards get a closeup, Rita's hands do not). Still, Benesh's sequence is interesting in how it is bigger than the three steps I put in my margin note. I like that her last thing is Rita reaching over Phil to turn off the alarm clock. If I read this progression Benesh gives and didn't know the film, I might think the symbolism here is Rita moving past Phil, but it is far from that. Rita is in fact turning off the alarm to stay in bed with Phil a little longer.

There are other problems with Benesh's focus on hands--like mentioning Phil hugging Ned, which is about arms and not hands--but I think the Rita thing demonstrates why I think focusing too specifically here misses the point. I think about it like this:

When writing a scholarly essay (as I try to make this blog most of the time), you provide a parenthetical citation to indicate where a quotation comes from. You should have enough information in your parenthetical (or in the sentence preceding the quotation itself) that your reader can readily find more information on the source in your references page. And, you provide enough information in your references page that your reader can go find the original source if he is so inclined. Similarly--I think--a discussion of symbolism should be able to work out of context but also, if one were to read the discussion--say Benesh's take on hands--before seeing the film in question, it should hold up upon viewing said film. That is to say, knowing the film as I do, I can see Benesh's point, but I don't think that viewing the film in context of Benesh's description works as well. Phil's hands were just folded as he made the "boats but not the ocean" speech, for example, but I wouldn't have even noticed his hands if I weren't writing this particular blog entry on this particular night. His folded hands don't mean anything.

But, on the other hand, if one were to read, say May's (2012) piece about love in Groundhog Day, it would follow that you would see the love story in the film if you watched it afterward. But, if you watched the film first, before reading May, you would still see that love story. Benesh is steering the focus, creating (or rather, attempting to create) meaning where there isn't any. She hints at larger meanings with the hands thing, but I think this is a case of not seeing the forest for the trees.

Today's reason to repeat a day forever: to see in every hand a synecdoche for each and every man, woman, and child. To see in every man-made object the hands that made it, the mind that imagined it, the history that led to it. To see context in the most minute of details, whether it makes sense or not.