it's your choice. so what's it gonna be?

It’s time once again to recap what has been going on at the Groundhog Day Project. Previous recaps can be reached by clicking on the following links:

Day 62: for your information
Day 121: how else could you know so much?
Day 180: it would be great to stay for some of the other events

Now, here’s what’s been going on since in the last 60 days:

(And here’s the latest version of the Transcript updated with notation for every line used as a title.)

Day 181 – i got ten bucks that says you’re mine was a brief entry that about Doris’ obsession with Phil and me maybe Phil Connoring Danny Rubin.

Day 182 – she wants to see paris before she dies suggests Doris is responsible for the time loop.

Day 183 – where are you going?, which goes over some of the events planned for the weekend in Woodstock, was written on the way there, with a little bit added after spending some time around town. The pilgrimage begins. Day 184 – it’s so beautiful was a recap of Day One in Woodstock written at a bar in town (and I have no idea why the image of the car covered in snow loads upside down; the image itself is not upside down). Day 185 – prognosticator of prognosticators was written in my hotel room after Day Two in Woodstock (and, like the last one, I have no idea why one of the images loads upside down… seriously, if you right click and choose “open image in new tab” it shows up the right way, and it’s just idiosyncratic enough that I don’t want to fix it by doing the obvious, reloading the image again). And, the pilgrimage ends with Day 186 – ok campers, rise and shine, written on the trip home, and detailing my interactions with Richard Henzel, who was one of the DJs in the film. 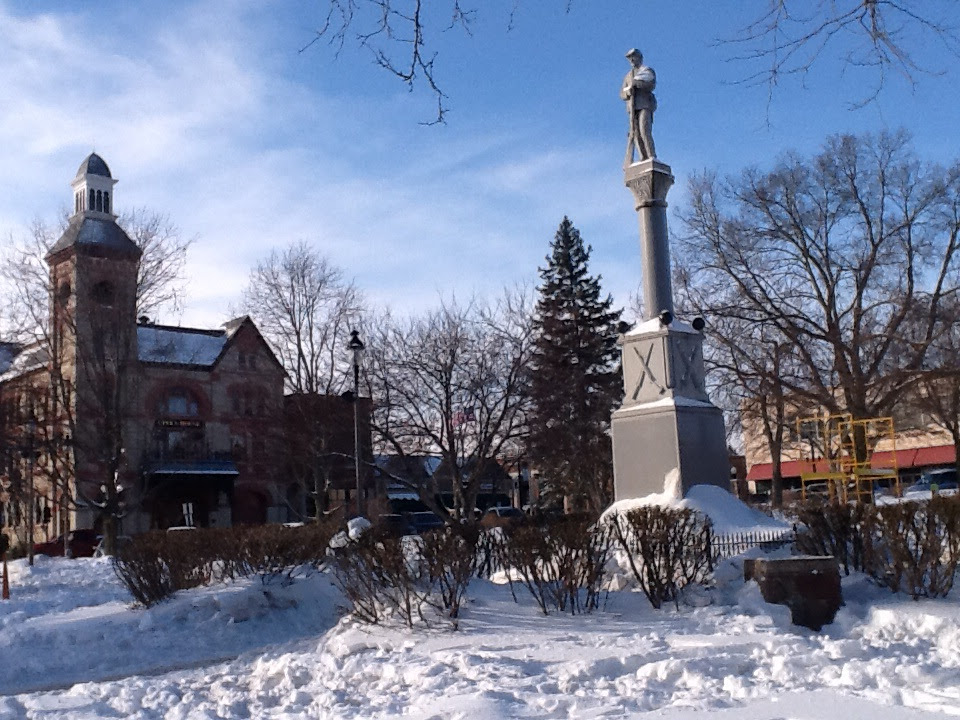 [If that image is upsidedown, I apologize. Back when I wrote this entry, I was still linking images from my website and sometimes blogger flipped 'em.]

But, of course, the pilgrimage had some spillover.

For example, Day 187 – what are the chances? details a few coincidences between my stay in Woodstock and details from the film.

Day 188 – to strangers and children details my notes from watching the movie on the big screen twice while I was in Woodstock.

Day 189 – turn to this tiny hamlet references an article by someone else who went to Woodstock for the weekend and explains why Groundhog Day is a classic worthy of the town celebrating it every year.

Day 190 – get some incredible footage starts the sharing of all my photos from Woodstock. Day 191 – hold a camera and point it at stuff continues with the photos.

Day 192 – first shot, right out of the box does two things, nitpicks some differences in layout of the town, comparing Woodstock and the film’s version of Punxsutawney, and details my notes taken while getting my friend Stephanie to watch the movie for the first time.

Day 193 – as an objective observer gets back to photos from Woodstock, as does Day 194 – where to put the camera.

Day 195 – in the movies celebrates the anniversary of the original release of Groundhog Day, 12 February 1993, recounting some things said by reviewers at the time.

Day 196 – keep the talent happy deals with Bill Murray and where Groundhog Day fit into his career.

Day 197 – i never miss it goes back to Woodstock with my notes from the walking tours with Bob Hudgins, location manager for the film.

Day 198 – it’s beginning to grow on me finishes out the photos from Woodstock with the ones I took of the display items in the local public library.

Day 199 – somebody asked me today is me figuring out what Phil Connors’ favorite color is.

Day 200 – i want to see his chart is me dealing with Phil Connors’ astrological sign(s).

Day 201 – he’s already in there details some of the many uses of the phrase “Groundhog Day” to compare to repetitive scenarios in the real world. This continues a little bit into Day 202 – it was just his time which also deals with an obituary and what it means to celebrate life.

Day 203 – what if there were no tomorrow? is a bit of a sequel to one of my favorite entries—Day 52 – if you only had one day to live, which is all about the meaning of life and what matters.

Day 205 – let me just drop a tip here is all about Larry as a character.

Day 206 – i’m waiting for the punchline is about, if anything, wanting something.

Day 207 – more than anything else and Day 208 – the last thing that you heard and Day 209 – the head groundhog honcho encompass my three day response to the death of Harold Ramis,

Day 210 – get it while it’s hot is a jumping on point of a sort for new arrivals.

Day 211 – it always makes me think of rome is my initial response to watching È già ieri, the Italian remake of Groundhog Day. Then I did a scene-by-scene breakdown in Day 212 – the way the sun hits the buildings in the afternoon since most of you will probably never see it.

Day 213 – congratulations, written on the day of the Oscars, details awards Groundhog Day was nominated for or won.

Day 214 – i am not making it up deals with the feud between Harold Ramis and Bill Murray after the production of Groundhog Day.

Day 215 – take a deep breah is about being timid, which Phil Connors is not.

In Day 216 – let’s not forget seatbelts I prepare to approach Julie Ellen Benesh’s (2011) dissertation on Groundhog Day systematically (and I still haven’t finished doing that).

Day 217 – here comes trouble gets into my notes on Benesh but gets sidetracked by Home Alone and my inability to pursue something (or someone, rather) I want.

Day 218 – you haven’t worked with her yet gets sidetracked in Meatballs before continuing with Benesh, including a bit on the monomyth and a return to the Christ-Figure.

Day 219 – seasons come and season go deals with Kubler-Ross and the stages of death and dying in relation to the structure of Groundhog Day, a topic that continues into Day 220 – i’ll make you smile again.

Day 221 – a dog barks explores the presence of (and potential meaning behind) dogs in Groundhog Day.

Day 222 – a gust of wind continues dealing with Benesh.

Day 223 – and longs to kiss your lips deals with Benesh, the Tao Te Ching, Siddhartha and kissing.

Day 224 – take me round again avoids Benesh (and the idea of being self-cursed) for Rita’s boyfriend and the Frog Prince. But then, two days later, I got back to the self-cursed thing in Day 226 – maybe it’s not a curse, which also delves into the excised character of Stephanie DeCastro and the curse that caused the time loop.

Meanwhile, Day 225 – what is Titicaca? gets sidetracked in adolescent humor.

Day 227 – would you help me with my pelvic tilt? uses Benesh as a jumping off point to explore phallic narcissism.

Prompted by my daughter (as I was with Phil’s favorite color above), Day 228 – do you have kids? is my attempt to decipher, from clues in the film, if Larry does indeed have any kids.

In Day 229 – welcome to our party, I try to avoid talking about Benesh and almost manage.

Day 230 – love handles ties Groundhog Day together with Love Actually and The Fountain to explore a very basic topic: love.

Day 231 – a place you used to crawl underneath consists of my thoughts as I watch Haunter a Canadian horror film that involves a repeating day.

Day 232 – i’m predicting march 21st was supposed to be about the vernal equinox, with some useless scientific factoids, but instead gets sidetracked into Benesh (which is the opposite direction things usually go) and the topics of communion, Phil’s emotional life, and his totemic opposite.

Day 233 – you got a problem with what i’m saying is my rejection of some of Benesh’s initial “findings” as I get to that part of her dissertation. Topics include the color white, lines, and not quite hands…

…because Day 234 – if you don’t believe me take me by the hand tries to make hands a separate issue.

Day 235 – can’t you feel you’re warming up? uses Benesh’s use of the Jungian shadow to link characters in Groundhog Day to characters in Peter Pan. It also deals in what I call “the progression of fire” in the film.

Day 236 – guy comes out with a big stick involves the name Gobbler’s Knob and whether or not it is sexually suggestive.

Day 238 – waiting to worship a rat is about groundhogs and melatonin and why groundhogs may wake up midwinter.

Day 239 – there is a major network interested in me shares the text of the press release I put together to promote this blog as Day 250 nears.

Today’s reason to repeat a day forever: to make a list of every day of my life and what I did on it… which might have to involve some hypnosis to get the specifics right. Does memory even include enough details to go day-by-day?