take me round again

Benesh (2011) is open to page 34, where there's a pink tab labeled "self-cursed." I'm on the floor by the coffee table as usual. Phil just showed up at Gobbler's Knob for the third time. Life on repeat.

I had a thought today... but let me set it up. So, in my car, I listen to my iPod by way of a cigarette lighter adapter that broadcasts a weak radio signal. The frequency I use most often happens to be, when I don't have the iPod playing over it, a Christian station. Sometimes, I'll hold off turning on my iPod for a moment or two, listen to what the Christians are saying. I grew up going to church regularly, so it's not like they'll say anything particularly new or insightful. But, it occurred to me that my response to the question, why are you doing this? (this being the Groundhog Day Project), if the person asking is a regular church attendee is why do you go to church? I've written before about how Groundhog Day and I are in a relationship. Today I was wondering if Groundhog Day qualified as my religion. For the record, I also once suggested in this blog that creating a religion around Groundhog Day would lead to nuclear war; peace on earth first, but then nuclear war.

The thing is, an entire radio station devoted basically to one book, and people wonder at what I'm doing? Nevermind the many other radio stations, the TV stations, the innumerable books on Biblical subjects, and of course the weekly (or more) church meetings at so many churches of so many denominations around the globe. To talk about one book. If Groundhog Day were a book, it wouldn't be even close to the length of the Holy Bible, but I can't spend a couple hours a day on it for a year without being thought crazy?

I'm not sure why I was feeling bitter in my car earlier; I just was. I actually had a pretty good day, slept in a bit, went to school and worked with some students on speeches, then had my last session of my org com class, home again to hang out with my daughter who was home sick, drove my son to honors orchestra, then back to school to sub a night class and help some students work on literature reviews, home for some Jeopardy!, Community and Big Bang Theory, now Groundhog Day. As Phil would say, "that was a pretty good day."

Arguably, my favorite song is "Epiphany" by Staind. I'm not one to pick favorites of anything, most of the time, but I've got a nice objective standard here--it's got the most plays on my iPod by a lot. I mention this because in it there's a bit that says,

I am nothing more than a little boy inside
That* cries out for attention
Yet I always try to hide
'Cause I talk to you like children,
Though I don't know how I feel
But I know I'll do the right thing
If the right thing is revealed

* obsessive's note: when singing along, I correct "that" to "who"

Those first few lines occur to me now because I suddenly had an inkling to write a press release about the Groundhog Day Project. That reporter from New York is taking too long, or maybe his article's not getting published... I should ask him. In the meantime, though, I feel like raising my pageviews again.

The last few lines there--that's how I feel about my life a lot of the time. And, I talk down to people sometimes, even when I shouldn't. Oh, some people deserve to be talked down to sometimes--case in point, anyone who attends church regularly but asks me why I'm watching this movie again and again--but some people just don't. And, I am not bold enough or knowledgeable enough all the time to do the right thing. But, I think I choose the right thing when it comes. And, I've even got my moments of boldness, just not as often as I'd like.

My rewritten sequence also includes a new throwaway character, Max. In trying to beef up the Phil and Rita love story a suggestion came out of my meetings with Harold and company to introduce a love interest for Rita. The thought was that this would create a sense of competition for Phil and, as if it were necessary, a further sense of unattainability to Rita. Max did help bring Phil and Rita closer together, and by the end of that draft, it was clear that he had served his purpose and could now move along into the trashcan. (p. 89)

As I have mentioned more than once, I've only ever gotten my hands on Rubin's original draft--it's in his book--and Ramis' second revision--I found it online. I bought a signed script off eBay hoping (more than I appreciated having Bill Murray's and Chris Elliott's autographs--honestly, I always preferred the getting of autographs to the having of autographs) it would be a shooting script, i.e. a later draft. But, it was just another copy of the second revision. Still had Hawley Stephanie DeCastro in it, and the young bride is still DORIS. And, it still had the Frog Prince in it.

I should explain... or have I before? Day 224 I forget sometimes what I've said or not said. I remember broad strokes, topics, but not every passing comment. Anyway, the Frog Prince:

Phil hangs out for no obvious reason near a first grade classroom at one point in the second revision "and the TEACHER is discussing a story with the class.

TEACHER
So the princess picked up the frog and kissed him.

TEACHER
Now who can tell me what happened when the princess kissed the frog. [sic]

LITTLE BOY
Her lips got slimed!

TEACHER
Okay, come on now. What happened when she kissed the frog?

LITTLE GIRL
The princess kissed the frog and the spell got broke and he turned into a handsome prince and they got married and lived happily ever after.

So, there's that. Then, later, when Phil kisses Rita on the last night of the time loop, he... well, just read:

It is an excellent likeness of Rita, the Snow White as alabaster, pure as marble, a beautiful and delicate homage.

RITA
(overwhelmed)
Nobody's ever done this for me. Not even a drawing. It's beautiful.

PHIL
This is how I see you. When it all gets too much, I just close my eyes and there you are--just like this. Take it home and keep it in the freezer.

A weird mix of too much schmaltz coupled with Phil Connors practicality. 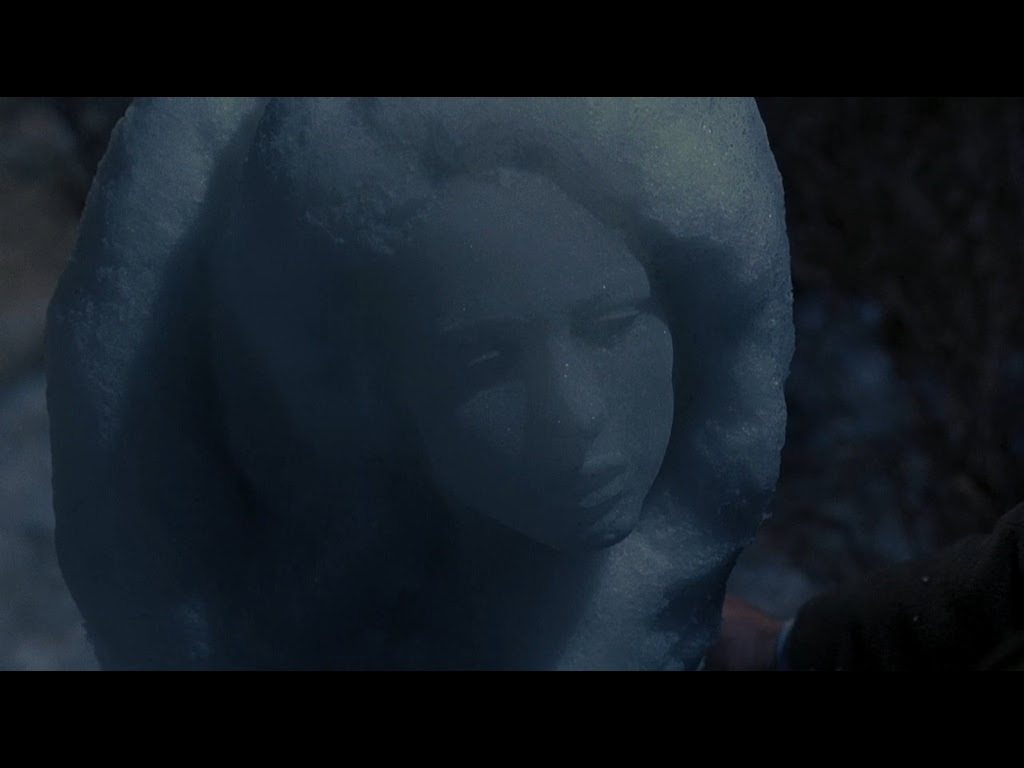 Rita embraces Phil. They are about to kiss, looking deep into each other's [sic] eyes.

PHIL
This one's for the Frog Prince.

PHIL
Will you come with me?

Rita nods. They continue standing there, embracing, warming each other in the cold night air.

RITA
(looks back at the ice sculpture)
We're just going to leave her?

What bugs me about the Frog Prince bit is that it makes no sense for Phil to do it. If he has become a better person by being with Rita, i.e. become the prince rather than the frog he used to be, then he wouldn't need to say this line. If he hasn't, then what's the point? Is he hoping that kissing Rita will make him a prince? Hoping Rita will break the spell makes this whole Frog Prince thing a little too... cute, a little too perfect. I'm glad it didn't last... though I think I read somewhere, in one of the many articles I've got collected I suppose, that they filmed the bit with the teacher reading to her students.

I wonder if they've got all the unused scenes somewhere. Do studios hold onto all of that stuff? Nowadays, with digital cameras, they probably can just keep every inch of footage in a hard drive, but in 1992? Not so much. There are a few deleted scenes available on the blu-ray.

(I still haven't gotten around to editing any of them back into the film, by the way.)

But, there aren't, I'm sure, all the completed scenes that didn't make it into the finished product. Certainly not all the shot footage.

And, the credits are rolling.

And, I never told you what that "self-cursed" tab meant. Oh well.

Today's reason to repeat a day forever: to do nothing but the right thing.