Today I watched Love Actually (2003), The Fountain (2006), and now Groundhog Day (1993). The obvious link between these three would be "the total agony of being in love" (in the words of Sam in Love Actually), but I think it's bigger than that. Taken together, I think these films twist the notion of love right into the notion of being human. Love or the pursuit of it, then, becomes the human condition. And, it doesn't have to be romantic love, though that is obviously the throughline to Love Actually and the most prominent love in Groundhog Day and the driving force to immortality in The Fountain...

Oh, assume that spoilers abound for all three films in what follows.

I'm thinking, besides romantic love rather than instead of it, of something more like bell hooks' idea of love. hooks says,

When we are taught that safety lies always with sameness, then difference, of any kind, will appear as a threat.

And, it may seem that I've jumped to another subject but, trust me, our ability or inability to connect with the Other is fundamental to the kind of love that keeps us alive. hooks continues:

When we choose to love we choose to move against fear--against alienation and separation. The choice to love is a choice to connect--to find ourselves in the other. (quoted in Foss, Foss & Trapp, 2002, p. 272)

May (2012)--featured in this entry--tells us, "One would not want to deny that [Phil] Connors comes to love Rita during the period of the eternal Groundhog Day." I have argued that the film presents to us both a vision of real love (what my fellow grad student David might call capital-L Love), and something... else. I'm not concerned today with the distinction between the two because they are one and the same in all the important ways. Despite hooks (1994), there is dignity in passion in our society... as long as it drives us forward and finds success. We don't like failure. The thing is... my thing is, I don't think it is possible to fail in love. A love unreturned is still a love given. hooks might not like that, since for her love is a mutual thing, but so much of the pessimism and cynicism in this world might be painted over with brighter tones if we bothered to simply love our fellow man.

Love Actually, at one point hinges on a young boy declaring his love for a young girl, and it context it seems perfectly reasonable that we hope for this preadolescent love to have some measure of success. Similarly, separated out of the context of the film--which goes back and forth between more than a dozen main characters with mostly disparate storylines--the relationship between Jamie and Aurelia, separated by their inability to speak the same language, is not... substantial enough to warrant a marriage proposal but we buy it anyway. When Jamie says that driving Aurelia home after work is his favorite part of his day and she says leaving him after work is the worst part of hers--and we are only privy to this juxtaposition by means of subtitles for Aurelia--we buy the romance of it, the inallowable possibility that something real can come from interaction without words. We want it to be possible. Similarly, when Phil Connors first looks at Rita in front of that bluescreen, and there is that momentary pause and that twinkle in his eye, we recognize before the film does, that this whole thing is going to hinge on love.

The Fountain on the other hand is not about the pursuit of love. Instead, on one level, it is about a man who neglects love just enough that he can do nothing but defy nature itself to make up for it when it is lost to him. All three of these films rely on the fairly generic theme that we need to live for today to make the most of our lives. Tommy has to run out into the snow with Izzy rather than what he really did, let her leave alone while he pursued a cure for her condition. Phil has to let Rita simply be rather than pursue her actively, leaving himself room to grow... 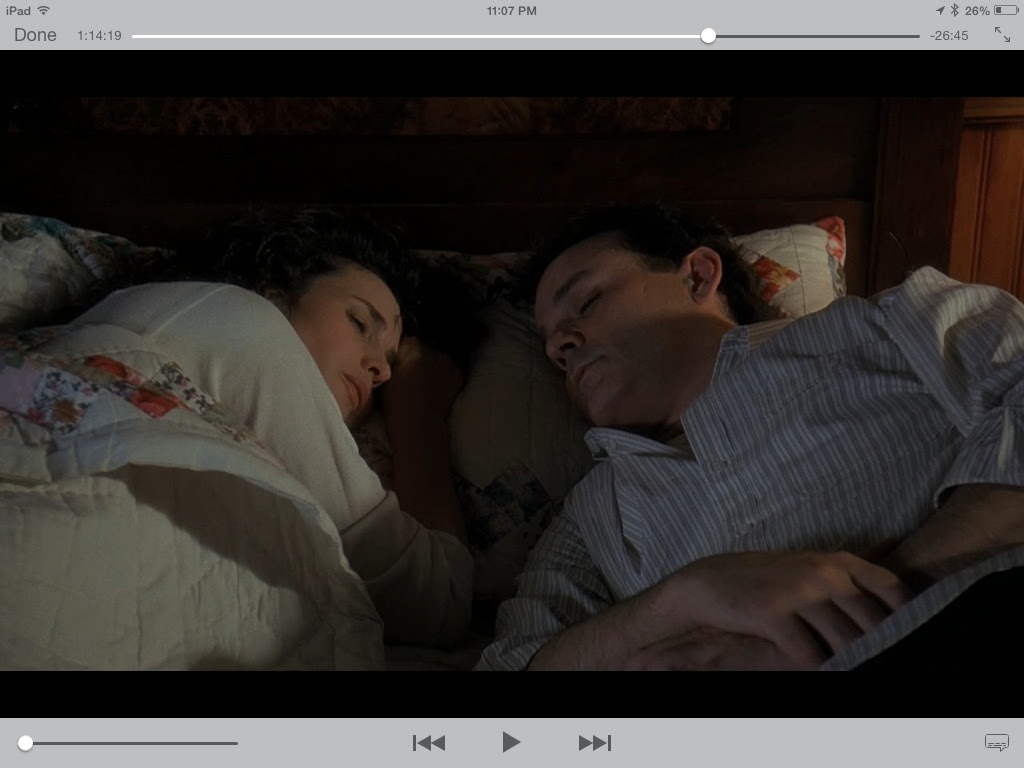 I'm stuck on The Fountain because I think it's broken structure creates a time loop out of each moment. Tommy and Tomas live forever even though each one fails his love... I don't think I'm saying rightly what I mean to say.

Think about it this way:

Phil Connors knows he is in a time loop, that each moment will repeat and he can do whatever he wants to do with that time. And he proceeds to waste it, on gluttony and lust and presumably all the other deadly sins, even if we don't get to see every iteration thereof. By the time he turns his attention to Rita, however doomed the approach may be, we yearn for it to succeed because romance, love, some sense that someone cares about us and we care about them--that is all stuff we know really matters for us to be alive. Meanwhile, Tommy in The Fountain is so hellbent on saving his wife from death he forgets to live with her while she's still around.

Except for that scene in the bathtub. He has just learned that his wife's condition is worsening and in that moment, the two of them are together, sloppily, spontaneously, and that connection is what fuels the rest of the film. He may be blind to the present elsewhere in the film, but there and then he is there and then. Tomas heads off in search of immortality for his queen at the potential (and expected) cost of his own life. Tommy searches for immortality for his wife at the potential cost of what time he has left with his wife, and it destroys him.

Though I'm not sure yet if it really connects to what I just said, I think now of Jamie and Aurelia in Love Actually, the scene in which she accidentally lets loose the pages of his manuscript into the wind and into a pond. Without thinking about it, without knowing what content lies in those pages, she runs down to the dock, strips out of her dress and dives in after them. It's an act of love premature to the budding relationship, but it's cute and in cinematic terms it serves as enough kindling that when she and Jamie are close in the scene thereafter, we assume they miss kiss. In Phil Connors' terms, "this is real, this is love." It doesn't matter if it isn't. In fact, I would argue that it is because we want it to be. And, that is not simply the case because it is a movie we are watching and we get to dictate the terms in which we process it. I would argue the same is true in life. When we care for another human being, when we long for them... and long for them to be well--that is love, no matter who says otherwise. And, spoken or unspoken, requited or unrequited, it makes the world a better place.

We do not need the mutual recognition of bell hooks' love. When we love someone else, or in simpler terms, when we care about another person's well being and do... anything to help that person along, recognition outside of ourselves and the possible betterment is irrelevant. It's nice. But, it's secondary to the act itself, the feeling itself.

So much of Love Actually is about "inappropriate" relationships--the prime minister for one of his assistants, a writer for the woman who cleans his cottage, a man for his best friend's new bride--but I'm tempted to say love is never inappropriate.

I'm reminded of Neil Hilborn's OCD poem--watch it if you have not already:

That line--"love is not a mistake"--that is my point. That is the point of all of this. There are other points to be made, other points I have made, you will make, the universe will make for us. But, well, all you need is love. Love is all you need. Without it, what's the point to everything else?

Today's reason to repeat a day forever: to love everyone because...

P.S. appropriately the next tab in Benesh (2011) is a yellow one labeled "communion."