a gust of wind

Thirty-three minutes into the film before I even open up a blank document to start writing tonight. I'm tired and I'm thoughtful tonight. Thinking about what I want from life, generally, and specifically, long-term and short. I was wondering last night what the worst thing I might do if I had the benefit of a time loop would be? I didn't come up with an answer because I wondered how long the time loop would have to keep going before I trusted it as the norm, before I knew, without a doubt the next morning would be the previous morning and no matter what I did no one would know about it but me...

Of course, then there's the problem of me knowing about it. I don't believe in the existence of the human soul, but for lack of better terminology, I must say that even there were no consequences outside myself, my soul would be scarred by doing deliberately in a time loop the things I wouldn't do outside it.

And, oddly enough this links me back to Benesh (2011) as the next bit of highlights after where I left off a few days back involve a book called The Magic of Groundhog Day by Paul Hannam. I've got a copy of the book on my Groundhog Day Project shelf but I haven't found the time to do more than browse through it yet. Too many other things to read, I suppose. But, I'll get to it.

I won't deal with what Benesh says about Hannam's book just yet. I may get back to this bit of Benesh once I've read the book. The bit I'll quote now is this:

The author, a consultant and professor of change leadership, calls the book the "best story" (p. xxiii) he knows for learning to live and provides a personal story of how his life resembled Phil Connors's both pre- and post-transformation. He describes Phil Connors as changing in a "haphazard, inconsistent and unplanned manner" (p. xxiv) and describes him as someone whose inconsistencies and contradictions are realistic, familiar, and easy to relate to.

After dealing with Hannam for a couple pages, Benesh moves on to Gilbey. I've read Gilbey, I've written about Gilbey, but I'll still share the notable bit Benesh shares--and she doesn't share much, considering how in depth Gilbey explores the film. She quotes Gilbey on how Groundhog Day is "a film that teaches us how to watch films" (Gilbey, 2004, p. 88, quoted in Benesh, 2011, p. 23). Gilbey continues:

The commonplace presence on DVDs of deleted scenes, different angles and directors' cuts has surreptitiously discredited the notion that there can be a single definitive version of a movie. But film was malleable long before video and DVD: every flashback, freeze-frame and jump-cut, each instance of slow-motion or split-screen, attest to this. These devices license the film-maker to thumb a nose at mortality by manipulating screen time, and delaying the inevitable end, in a way that can never be possible with real time. Groundhog Day, like the best work of Alain Resnais or Nicolas Roeg, is a masterclass in these possibilities. In its basic form it already incorporates a wealth of 'extra scenes', 'different angles' and tragic or humorous alternate endings, while each sequence within the time loop is like an inbuilt remake of, or sequel to, the one that precedes it. All bases are covered. (Gilbey, 2004, p. 88)

And, I finished typing up that quotation as Rita slapped Phil eight times in a row, as if to prove the point.

Danny Rubin's story is a clever metaphorical fable about moviemaking. Actors endure endless retakes of the same scene, with new improvs, trying to keep it fresh on the umpteenth take. Eventually, Phil knows the action so well, he can literally direct it: "A gust of wind. A dog barks." And finally he is the writer, changing history by anticipating it. But this Chinese-puzzle-box movie has a deeper message inside. It says that most folks' lives are like Phil's on Groundhog Day: a repetition, with the tiniest variations, of ritual pleasures and annoyances. Routine is the metronome marking most of our time on earth. Phil's gift is to see the routine and seize the day. (p. 61)

I'm not even sure it connects, but I'm reminded of the scene in Danny Rubin's original script in which Phil talks to a priest. The priest tells him, "Phil. You think nobody understands you. You’re all alone. Nobody has ever felt what you’re feeling. Could be you’re wrong" (Rubin, 2012, p. 60). We all like to think we're unique but yeah, most of our lives are the same boring stuff over and over, and it's the same boring stuff that the guy next to us is living day in and day out as well. It's the same boring stuff that girl across the way is dealing with also. If we're lucky, we can befriend someone else and share the boring stuff. If we're lucky, we can find personal and intimate interactions with other people and enjoy their company in the face of the world.

On page 24 of Benesh, I've got another X. Benesh gets the order wrong with Phil's interactions with the Old Man. In a paragraph about repetition and the return of characters in different parts of the film (her chief example Nancy Taylor), Benesh (2011) says, "Likewise the elderly begging man who asks Phil for money is finally given money, but beyond that is later given a meal, then mouth-to-mouth, and ultimately a trip to the Emergency Room that results in Phil's important character-developing confrontation with death" (p. 24). 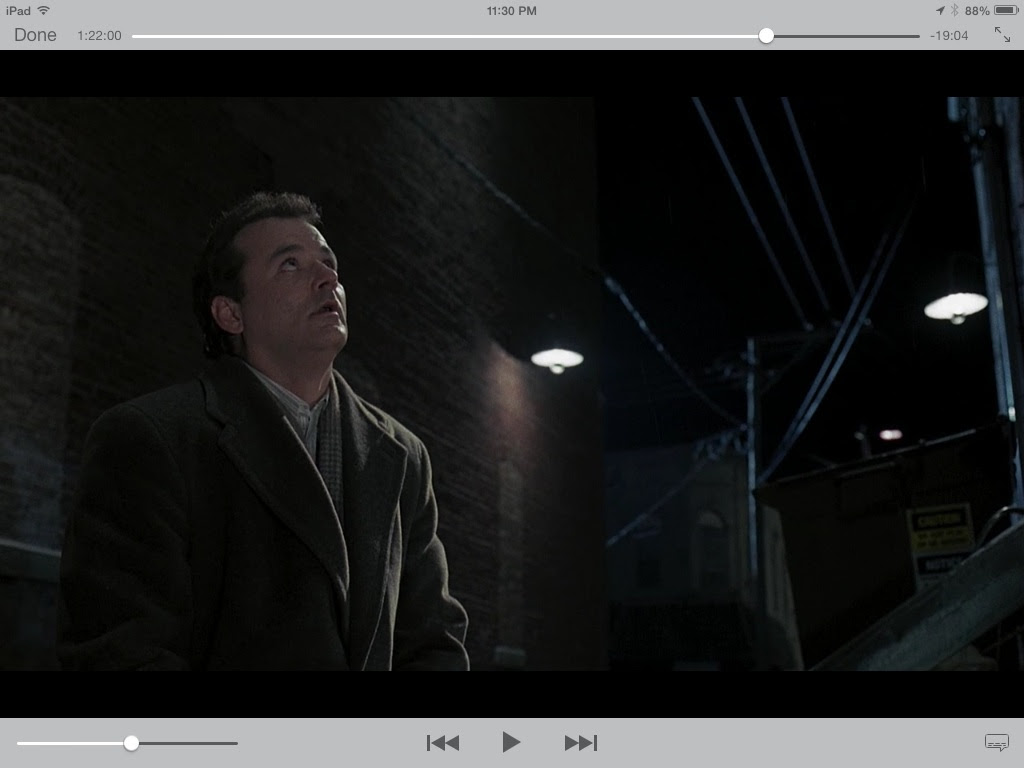 On the one hand, I might nitpick and suggest that Phil's "important character-developing confrontation with death" began earlier with his own, but that's a subjective call. Objectively, though, Benesh is simply wrong about her order. It's money, ER, meal, mouth-to-mouth. In fact, in the margin, I wrote this list:

There's an arrow running down the left side of the list and below the list: "getting more personal." There's a pink tab at the side of the page, by the way, labeled "O'Reilly development." And, the list spells out quite simply the way Phil's relationship with O'Reilly goes; in fact I had intended to write an entire entry about just that but realized the list covered most of what I'd need to say. Phil basically ignores the old homeless man on the corner at first; well, actually, he does that fake pat of the pockets like he's looking for money to give him, then just walks on by. Karma gets to him immediately thereafter in the form of "giant leach" Ned Ryerson. Finally, at about 1:15 in--it just happened on my television because my timing is awesome today--Phil gives O'Reilly money. Only problem is, that's not enough. Later Phil happens past the alley and sees O'Reilly staggering. He takes him the hospital only to have him die. The next day (that we see), he's got O'Reilly at the Tip Top counter, and he's feeding him. Benesh (2011) will later make a point about eating in the film--a point I think I made better--in which she draws a direct throughline from Phil imitating Larry eating outside the Pennsylvanian Hotel on February 1st, to Phil gorging on cake in the Tip Top, to Phil providing food to O'Reilly (p. 98). I didn't boil down food to just those three things because a) I'm inclusive and b) I'm obsessive.

Also on page 24, I've got highlighted the following:

Thompson (1999) analyzes the structure of Groundhog Day, delineating "setup," complicating action, development, climax, and epilogue. She considers Groundhog Day a film in the classical mode, meaning the protagonist errs and redeems himself (p. 131), stating that such films provide characteristically strong unity and coherence. This unity is created through what Bruner (1991) calls "narrative accrual" (p. 8). Thompson (1999) notes that the film is unusual for this sub-genre in that it has no external protagonist [sic], only a protagonist and antagonist combined in one. (Benesh, 2011, p. 24)

A bit of a typo, I suppose there, since she clearly means there is no external "antagonist" but it hardly matters because Phil Connors is complicated enough to be his own antagonist. In fact, Benesh (2011) says, "Thompson (1999) points out that the casting of Bill Murray signals the audience that his character will be potentially complex and multilayered" (p. 25).

Phil is dancing with Rita now. He always dances with Rita. And, all is right with the world... well, not all. But, here in this room, here in this moment, things don't seem so bad.

Today's reason to repeat a day forever: to redeem my errors.