the guy comes out with a big stick

Did anybody else find the name of the park where the groundhog ceremony was held funny?

That's the start of a thread on IMDb regarding Groundhog Day's Gobbler's Knob. Maybe I don't have the mind of a teenage boy but I never took it as anything more than the place's name. In fact, on the IMDb thread, I pointed out that knob is a geographical term and gobbler presumably refers to turkeys... I haven't confirmed the turkey thing as far as why the real Gobbler's Knob is called that, but my guess is once upon a time it has some wild turkeys hanging about. I never considered it as something suggestive because, if nothing else, that's the name of the actual place in Punxsutawney where they hold the groundhog ceremony.

And, even Benesh (2011) falls prey to the adolescent urge to hear sexual jokes in things that--probably--are not. Don't get me wrong, I wouldn't suggest that the film chose the location or referenced its name as a sex joke. But, since I don't actually know the origin of the name, I cannot be sure the name itself is not a sex joke. But anyway, Benesh says, "The suggestively named town square, Gobbler's Knob, setting of the groundhog ceremony, is an example of a phallicentric, yet also communal space, thus combining aspects of masculine and feminine" (p. 81).

(Note: I've got an X through "suggestively.")

My handwritten note in the margin, with a line pointed (ironically?) to "phallicentric," says, "for the column, NOT the name." There's a column at the center of the square, a military memorial. That column might be phallic, but nothing else about the square suggests phallicentrism.

But, I can't help but wonder now about the origin of the name, Gobbler's Knob. The real Gobbler's Knob is a wooded area outside of town, not in the town square.

knob (nŏb) n.
1. A rounded protuberance.
2. a. A rounded handle, as on a drawer or door.
b. A rounded control switch or dial.
3. A prominent rounded hill or mountain.

According to English Through the Ages, knob was a word by the year 1100. And, I cheated there a little, picking the string of definitions that did not include a slang term for the penis. My point here is that #3 there is a thing. Another definition specifies that a geographic knob could be morainic. A moraine is "a mass of rocks and sediment carried down and deposited by a glacier, typically as ridges at its edges or extremity." So, yeah, a knob is an actual geographic thing. And, Roadside America tells us, "The real [Gobbler's Knob] location is a couple of miles out of town, in a little clearing at the top of a wooded hill."

There are other Gobbler's (or Gobblers) Knobs, by the way. A sampling might include Gobbler's Knob Road in Dover and Pawling, New York, a "hill" in Mount Rainier National Park, Washington, a "hill" ten miles east of Salt Lake City, Utah, 10 summits in Oregon, and an amusement park in Cobleskill, New York. 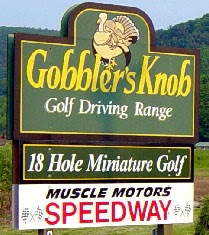 The amusement park, by the way, "Schoharie County's Family Fun Park" has turkeys (aka gobblers) displayed prominently on its website. I was hoping they had a petting zoo with turkeys until I remembered the wild turkeys are dangerous and domesticated ones are fat and probably fairly lethargic.

While Googling "Gobbler's Knob" I found an interesting bit in a book called Chasing Spring: An American Journey Through a Changing Season. The author refers to ceremonies like the Groundhog Day one, saying they "are, or were in their origin, magical rites intended to insure the revival of nature in spring" (Stutz, 2006, p. 23). I think back to the sixth entry in this blog--230 days ago--one entitled "groundhog day used to mean something in this town." I wrote a relatively brief explanation for the origins of Groundhog Day... Imbolc, Candlemas... and I think now of pagan ritual and I wonder if the men who went out to Gobbler's Knob outside Punxsutawney not because that was a place where they found groundhogs (or turkeys for that matter), not because the hill might be a good place for a secular ritual that would follow year after year after year, but because Gobbler's Knob was already a place where magical rites took place, where practitioners of witchcraft danced and probably also performed sex acts, and maybe the name has nothing at all to do with turkeys.

I cannot find a definitive explanation as to why that particular hill outside Punxsutawney is called Gobbler's Knob, so I suppose I can choose to like the most interesting one. That is how we humans do things, isn't it?

Punxsutawney, by the way, one source says comes from the Unami-Len'api term Put'schisk'tey, which means "poison vine." But more sources say the town's name comes from a Native American terms for "mosquito town."

Today's reason to repeat a day forever: to perform magical rites... for fun, not because I believe in them.