This is from yesterday:

[Benesh] writes about references to eating the groundhog--Phil says he "had groundhog for lunch" and he reports about how the people of Punxsutawney "used to take the hog out and they used to eat it"--and she adds one more: "In another reference to ingesting the Other, Phil Connors once proposes toasting [to] the groundhog" (Benesh, 2011, p. 88). I don't know how it works in Benesh's circles, but whenever I have been present for a toast, we have not then eaten the person (or thing) being toasted. Still, there's a pink tab here labeled "eating groundhog."

Phil Connors' desire to ingest the groundhog seems a parallel to his early hostile come-ons toward Rita, the allusion to his pelvic tilt, and to her sleeping alone and missing him, followed by his attempts to seduce her. (p. 88)

Because, clearly, Phil wants to eat Rita... and I'm using "eat" in the literal sense. This is what Benesh is implying. I know she is suggesting, or trying to suggest, digestion as a metaphor, but she isn't quite getting to her point clearly enough here. Instead, Phil wants to eat the groundhog because he toasts to it, and wants to eat Rita because... I don't know.

Her very next sentence probably says it better than that whole bit so far. She writes: "With both of them, the groundhog and Rita, who ultimately become his role models and inspiration, he at first wants to be close by dominating the other. But still, he wants to be close, if only to consume and conquer" (p. 88-9). Let me backtrack slightly. I mentioned yesterday how Benesh counters Phil's supposed liking of high places (and being "inflated and full of hot air") with the groundhog being "lowly, humble, and grounded, despite his being lauded by the town" (p. 87). I can accept the idea that an underground-dwelling rodent is "grounded" even if it does read as a bit on-the-nose, but I think it is presumptuous to suggest that Punxsutawney Phil is humble; the furry little guy has been demanding attention once a year for well over a century and he's got a circle of human minions who transport him around, and a climate-controlled abode in the public library.

It gets worse. Phil not only wants to eat the groundhog, he wants to have sex with it. Benesh writes:

Except... no. In fact, structurally, the film sets it up so that these two things have very little to do with one another. Phil wants nothing to do with the groundhog. In the original screenplay, the line Gus says in the Tip Top, "Phil, like the groundhog Phil?" happens numerous times, and Phil Connors is bothered by it every time. Still, he responds, "Yeah, like the groundhog Phil." Reluctantly, he admits he has something in common with the groundhog, but he makes no effort to get near the groundhog except to kill it. If Benesh is correct... actually, the film suggests that she is more correct than the original screenplay does, since Phil only actually gets near the groundhog once and then to kill them both; in the original script, Phil stalks and tries to kill the groundhog well before he has sunk into suicidal depression. He goes after the groundhog out of desperation and anger. In the film, all of these feelings are rolled into one sequence. Phil is depressed after failing to "get close" to Rita, so he tries to end the time loop, to end the curse...

I don't mean to necessarily argue with Benesh here, actually. I think she is getting at an important point, but her hands are tied by her choice to go with the "reproductive metaphor" and the "digestive metaphor" and the "respiration metaphor" without--or so she suggests--a textual analysis of the film. My yellow tab on this page is labeled "consuming mating." And, I think the suggestion that these two processes can be figuratively one and the same is an important one to make here, because Phil's attempts on "date night" to practically become Rita by adopting all of her favorite things and all of her dreams as his own is about him not only mating with Rita but, metaphorically, consuming her, becoming her. This is quite important in understanding how Phil can get to the point that he is suicidal not because the time loop itself is beating him down but, specifically because he has been beaten by his own "pursuit" of Rita. Essentially, consumption equals consummation.

Origin of CONSUME
Middle English, from Middle French or Latin; Middle French consumer, from Latin consumere, from com- + sumere to take up, take, from sub- up + emere to take...
First Known Use: 14th century

Origin of CONSUMMATE
Middle English consummat fulfilled, from Latin consummatus, past participle of consummare to sum up, finish, from com- + summa sum
First Known Use: 1527

Phil, then, is not failing to win over Rita but to transform himself--and this is an argument Benesh should appreciate since her overarching topic is transformation. "Date night" is not about Phil trying to seduce Rita. Phil is trying to become someone who doesn't need to seduce Rita. He is trying to not be himself. But, he fails, ironically, because he tries too hard. Instead of just being a better person--a better version of himself--he lies about who he is. Lying about who he is doesn't really change anything, so of course he cannot succeed in seducing Rita or changing himself. and, in failing to do either--but especially the latter--he has not only not escaped the curse of the time loop, but he has actually made matters worse. As Hannam (2008)--which I am finally reading--describes it, Phil is suffering from "the Groundhog Day Effect."

A repetitive pattern is not necessarily harmful. Civilization would collapse without the repetitive patterns necessary to the supply of food and energy. As an individual, a regular structure is fine if you are happy in your routine. The difficulty arises if you are not happy, if you are not at peace, if you see no magic in everyday life. It is not so much outer repetition but inner repetition--repetitive thought patterns--that create the Groundhog Day Effect.

When we are oblivious to the magic of everyday life, caught in destructive and repetitive thought patterns, our first tendency is often to blame our predicament on our jobs, where we live, or on our partners. We believe that by changing our external circumstances we will break free from the loop. (p. 7-8)

Phil's thought patterns haven't really changed. He was a bit of a jerk before, he was a womanizer before. And, pursuing Rita he is still just that, even if he might be altering his individual actions and the individual things he says to make himself seem like something different. Inside, he is still the same guy.

In terms of couples and marriage, Johnson (2008) writes of what she calls "demon dialogues"--the topics that can turn a bit too easily into arguments. She writes:

For all of us, the person we love most in the world, the one who can send us soaring joyfully into space, is also the person who can send us crashing back to earth. All it takes is a slight turning away of the head or a flip, careless remark. There is no closeness without this sensitivity. If our connection with our mate is safe and strong, we can deal with these moments of sensitivity. Indeed, we can use them to bring our partner even closer. But when we don’t feel safe and connected, these moments are like a spark in a tinder forest. They set fire to the whole relationship. (p. 54)

We get stuck in the same patterns over and over, the same (potentially) volatile topics rear their heads, and things erupt. For Phil, he seems to be trying to fill the void in himself with something approximating love but it mostly amounts to sex. And, as he changes the outside of himself to manipulate Rita into his room, it is still a shallow pursuit of sex. There's a moment in the film I don't think I have every mentioned on this blog before. As Rita looks around Phil's room and wanders specifically into the bedroom side, Phil actually attempts to block her path back out of that side of the room. He isn't forceful about it, but he does get in her way. 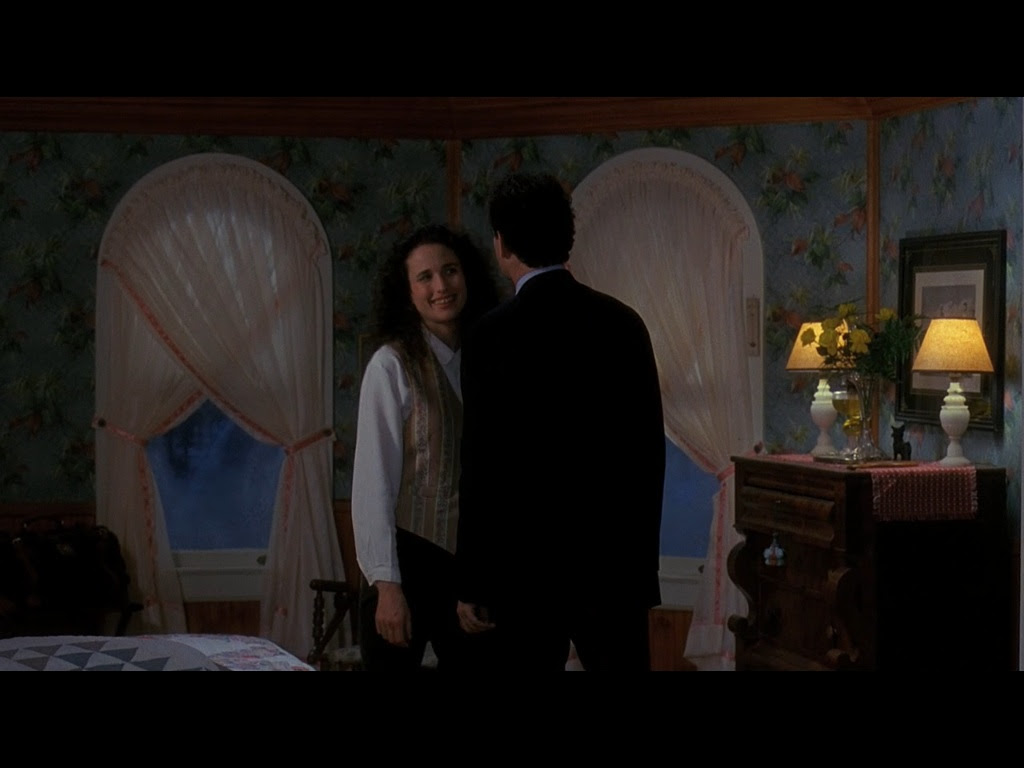 Then, she walks around him. In a darker film, things may have gone further there. But, then Phil would have had even farther to go to dig himself out of the hole within himself to be a good person.

I've said before, Phil is not trapped in Punxsutawney, but rather he was trapped in Pittsburgh, trapped inside himself. In Punxsutawney, even if just because he is there so long that he runs out of other options, he finally manages to transform himself and become someone better, to get out of the demon dialogue he's go going with his own id, out of the Groundhog Day Effect that plagued his pre-loop life.

(Interestingly, with the mention of Phil's id there, I thought of my recent paper regarding Plato's charioteer myth and the modern visual trope of the shoulder angel and shoulder devil. It was the one paper--in two different incarnations now--in grad school so far that I didn't explicitly connect to Groundhog Day. I still probably couldn't squeeze the film into the paper, but I do think the paper could be squeezed into the blog at least. But, with nearly 1800 words already today, I will leave that for another time.)

Today's reason to repeat a day forever: to let the black horse win, to let the white horse win, and to let the charioteer have his hedonistic moments as well as his ascetic moments... and to find the balance... which is to say, more generically, to be just like Phil Connors all the way to becoming a better version of myself.