At the Oscars tonight, Bill Murray presented the Cinematography award with Amy Adams. After listing the nominees, Murray added: "Oh, we forgot one, Harold Ramis for Caddyshack, Ghostbusters and Groundhog Day." Got a nice round of applause, and some cool tweets.

(And, it occurs to me I don't think I use profanity much this blog, so I suppose I might apologize for that one... or, well, no, not really. Harold Ramis and Bill Murray deserve that sort of all-caps energy.)

Harold Ramis and I together did the National Lampoon Show off Broadway, Meatballs, Stripes, Caddyshack, Ghostbusters and Groundhog Day. He earned his keep on this planet. God bless him.

--was so brief because their "feud" on the set of Groundhog Day had never been properly resolved.

I haven't yet written about that feud, nor will I today. Because I wanted to mention on this Oscar day the awards Groundhog Day won.

First of all, Groundhog Day was not nominated for any Oscars.

It took the British Comedy Award for Best Comedy Film over Much Ado About Nothing and Strictly Ballroom.

The film was nominated for the Hugo Award for Best Dramatic Presentation along with The Nightmare Before Christmas, Addams Family Values, Babylon 5 - "The Gathering" and Jurassic Park. The dinosaurs won.

The New York Film Critics Circle Awards named a tie between Schindler's List and Groundhog Day for second place, runners up to The Piano for Best Screenplay (The Piano also won Original Screenplay at the Oscars vs Dave, In the Line of Fire, Philadelphia and Sleepless in Seattle). At the BAFTA awards, Groundhog Day beat out The Piano, In the Line of Fire and Sleepless in Seattle for Best Original Screenplay. Ramis and Rubin also won Screenwriter of the Year from the London Film Critics Circle.

I don't know how the BMI Film and TV Awards worked in 1994, but George Fenton won for the music in Groundhog Day along with Alan Silvestri for The Bodyguard and for Grumpy Old Men, Hans Zimmer for Cool Runnings, Basil Poledouris for Free Willy, Dave Grusin for The Firm, Randy Edelman for The Last of the Mohicans, Thomas Newman for Scent of a Woman, and John Williams for both Jurassic Park and Schindler's List.

At the Saturn Awards, Bill Murray was nominated for Best Actor versus Robert Downey, Jr. for Heart and Souls, Jeff Bridges for The Vanishing, Robert Patrick for Fire in the Sky, Arnold Schwarzenegger for Last Action Hero, Christian Slater for True Romance and Max von Sydow for Needful Things. Robert Downey, Jr. won.

Harold Ramis was also nominated at the Saturn Awards, for Best Director versus Steven Spielberg for Jurassic Park, John McTiernan for Last Action Hero, George A. Romero for The Dark Half, Henry Selick for The Nightmare Before Christmas, Ron Underwood for Heart and Souls and John Woo for Hard Target. The dinosaurs won again.

Groundhog Day was nominated for the Saturn Award for Best Writing versus Jurassic Park, Fire in the Sky, Heart and Souls, Kalifornia, Last Action Hero and True Romance. The dinosaurs won again.

Finally--for the Saturn Awards--Groundhog Day was nominated for Best Fantasy Film versus The Nightmare Before Christmas, Addams Family Values, Heart and Souls, Hocus Pocus, Last Action Hero and Rookie of the Year. The stop motion took the prize for this one.

In more recent years, Groundhog Day was also named one of the top ten American films by Stanley Fish at the New York Times. The list follows:

And, Groundhog Day was named one of the top ten fantasy films by AFI. It was listed as #8... Here's that list:

Interesting sidenote: on the AFI website they had this shot that is not in Groundhog Day: 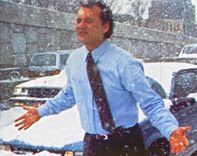 Todays' reason to repeat a day forever: to invent a new award--the Groundhog Day Award, to give to the film with the most philosophical message disguised as nice audience-friendly fare.