you got a problem with what i'm saying

Page 67 of Benesh (2011) is interesting. It's the start of her Chapter Four: Findings. At the bottom of the page, she lists, "The symbolic images chosen to amplify" and I have handwritten notes next to each one.

My handwritten note: whereas I noticed trios

I know I've written about the trio thing before, but I cannot find the entry [found it].

Her second: lines and spheres

My handwritten note: I reject

This one, I have definitely written about before.

My handwritten note: I select only blue.

Which you can read about in at least a shallow way here.

Her fourth: hands, and

(I put a box around hands)

My handwritten note: is it, for example, Phil's still hand in the opening shot, countered by his moving, energetic hands playing piano? in that sense, his hands move when he stops in front the of the moving truck... so movement is both life and death? stillness is internal death. 1-11-14

I think I was, in British terms (not that I'm British) taking the piss here. Sort of making fun of Benesh... but also accepting that maybe there's something there.

Her last: the groundhog

My handwritten note (not next to this last image but below the entire list): another motif worth exploring is mimicry (mirroring and matching) + echoes (e.g. "out on a limb" --> Zacchaeus)

Also, highlighted: "All these metaphors [reproduction, digestion, and respiration] depict means of taking in and assimilating the Other, surrendering the former self, and actualizing a newly expanded capacity" (Benesh, 2011, p. 68).

The next sheet has a lot of writing from me as well, but I've already incorporated these notes into an entry on Benesh and the film's structure.

I suppose it makes sense I would have more notes in the Findings chapter than Benesh's literature review or methods sections. The next page has a few notes as well.

Benesh says, "We soon see Phil paired with Larry, then with a production assistant, and finally with Rita" (p. 71). I've got an X through "paired," another X through "then" and another X through "and" because the scene in question (right after Phil's on air at the station) never frames Phil with Larry or Phil with Kenny, but rather all three together. And, nowhere in this scene or in the van ride that follows is Phil "paired" with Rita either, since Larry is there the entire time. In fact, the only person Phil is paired with in the station sequence is Nan, AKA Hairdo.

Benesh says, "By the end of the film, Phil's pairings have become more harmonious. He... hugs Ned Ryerson..." (p. 71). I've got "harmonious" and "hugs Ned" underlined, with an X between the two, and this handwritten note: "Phil hugging Ned is NOT harmonious. And, I still stand by that one. Phil hugging Ned is one of the couple things in the film that I think don't quite fit their timing in the story. By the time we see Phil hug Ned, Phil should actually be hugging Ned in a harmonious way; instead, he deliberately hugs him long enough to creep him out and send him running. And, it gets a laugh; I even think it's mildly amusing. But, it seems incongruous with Phil at that point in the journey. This is Phil near the end of his transformation--and given that transformation is Benesh's topic of choice, I think she should have seen that the hug isn't quite right for when it happens. By the way, the pink tab on this sheet is labeled "hug is not harmonious."

(For the record--I have mentioned it before, I'm pretty sure--the other detail I think is a little off in timing is Phil offering $1000 to Mary the Piano Teacher. On the one hand, yes, maybe after as long as he may have been in the time loop at this point, money may not mean anything to him. On the other hand, this far into the time loop, he also should be more mature about decisions like this. I choose to assume that on the next resumption he offered Mary less money for a lesson, and on the next resumption even less, until he found the lowest amount he could pay for the lesson without spending all of exo-loop Phil Connors' money... you know, just in case the loop suddenly ends.)

Those are the page 71 nitpicks.

On the next page I actually started reading into an image from the film that Benesh included... something like this: 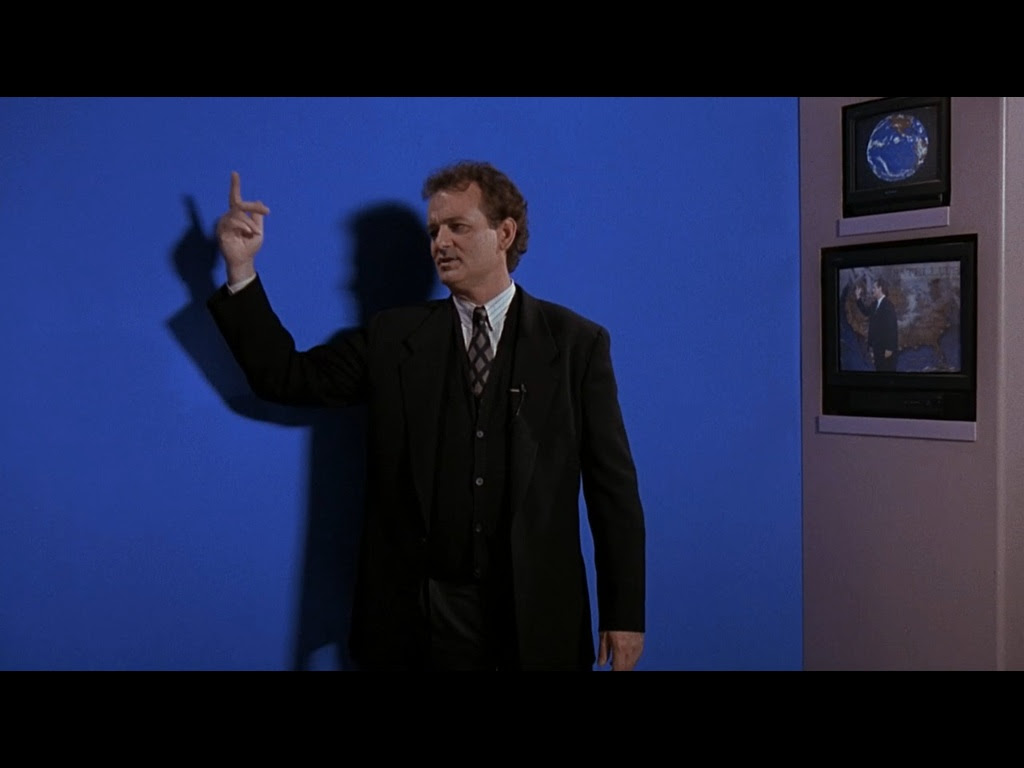 I suppose I'm buying into Benesh's "pairing" symbology a bit in these comments, but I found a way to tie her pairing and these visuals into a basic outline of Phil's journey. On that image above, I've got this handwritten note in the margin: "big Phil - alone, egocentric, separate from the world. small Phil - on the map, part of the world, suppressed"

Then, there is this image: 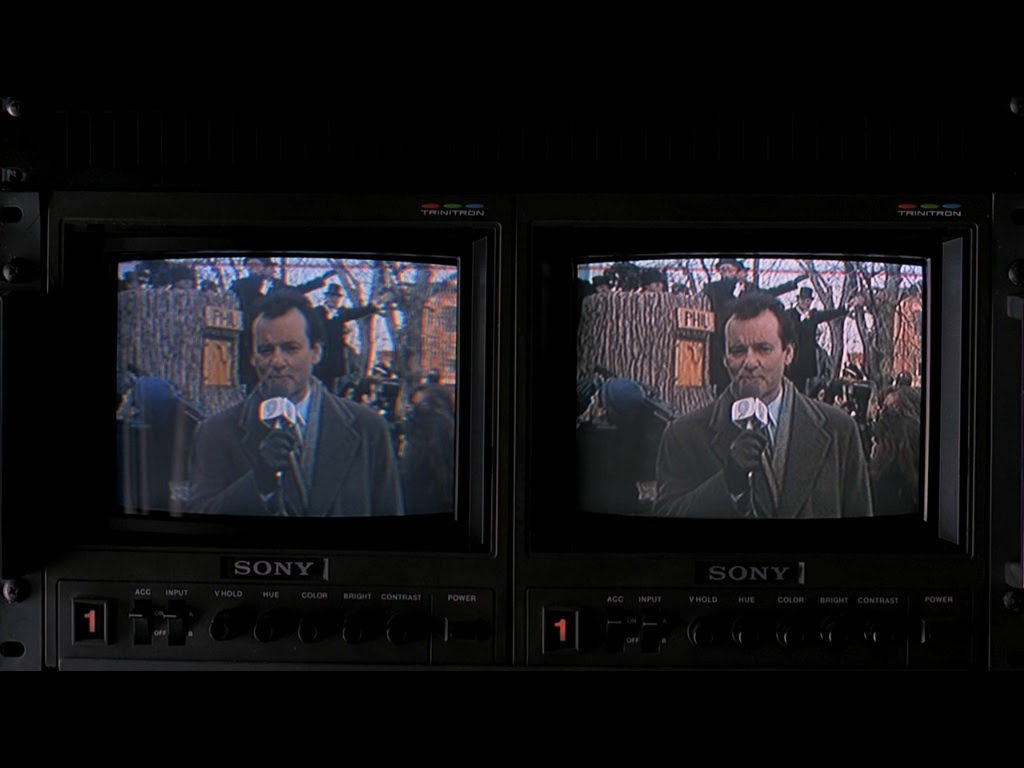 My handwritten note: "small Phil has doubled and grown larger."

Then, I've got a third handwritten note without its own image: "in the end, big Phil is now part of the world, framed in the Mandala of grounding imagery--the groundhog 1-11-14." I've already written about that "Mandala" thing, which is, so far, possibly my favorite pull from Benesh.

Highlighted at the bottom of the page: "Conversely, just as one entity can split, become two, and differentiate, two can merge and become one" (Benesh, 2011, p. 72).

I've know already discussed the snowman scenes in terms of Benesh's pairing but I can't find the specific entry I'm thinking of at the moment [found it]. Anyway, she says, "The important snowman scenes... are presented as a pair" (p. 73). My handwritten note in the margin: "though the snowman is identical in body but with two different heads."

Benesh says, Phil "and anchorwoman Nan mirror one another, twisting their hands together" (p. 74). I take issue with the word twisting. Folded hands are normal things, while twisting implies what something more like wringing, something more active. But, Benesh is trying to make something out of hands--which should probably get an entire entry... maybe it will.

Finally, for today, Benesh says, "Rita repeatedly smooths Phil's lapel before the groundhog ceremonies, slaps him nine times, flips cards into a hat with him in his room one night..." (p. 74). I won't include the entire quotation because it fits better that separate discussion of hands. But, I will mention that there is an X through "nine" as Rita slaps Phil ten times, once on Day Two, once on that best version of "date night" and then eight times in a row in the montage.

Today's reason to repeat a day forever: to be more constructive than critical, more uplifting than demeaning, more complimentary than insulting.