i don't believe this macho bullshit

Before I get into Commando tonight, I must share something. My class schedule for the winter quarter includes a performance studies class (from which I hope to find a few new sources for my thesis since it involves the presentation of self and whatnot) and a media theory class. I missed the first night of the media theory class last week because of the Utah trip but made it tonight and the class consisted basically of a watching a movie and then discussing it afterward, picking it apart in different ways. I'm sitting there like, I was going to do that anyway. Next week, we're supposed to bring a clip from a movie of our choice and then talk about that movie using the criteria we used tonight. We're talking about what constitutes "Classic Hollywood Cinema."

(Going by the 8 criteria we used tonight, Commando qualifies except for what seems to be a lot of handheld camera.)

One of the things that got mentioned was rugged individualism. That term became a thing when Herbert Hoover used the phrase in a campaign speech in 1928. After talking about how, during World War I, we "necessarily turned to the Government to solve every difficult economic problem" he speaks of America turning into "a socialistic state." Then, there's this:

When the war closed the most vital of all issues was whether Governments should continue war ownership and operation of many instrumentalities of production and distribution. We were challenged with the choice of the American system "rugged individualism" or the choice of a European system of diametrically opposed doctrines--doctrines of paternalism and state socialism.

He goes on, but the definition is more important here. Rugged individualism suggests the idea that the government should not interfere with the lives of the people, that everything is about the individual. The individual controls his own life. The individual makes his own decisions. The individual faces the consequences. It's the kind of right-wing political ideology that assumes someone on welfare is lazy... and stealing from the good taxpayers.

It's the kind of political ideology celebrated by "Classic Hollywood Cinema"

(And, for the record, I was already going to write about it today.)

and promoted immensely by 1980s action fare. Lethal Weapon, on the one hand, may provide a little depth to its male leads in terms of letting them emote and show weakness. Die Hard may do a little of that, as well, at least with physical weakness. But, on the other hand, Commando gives us a protagonist who doesn't really show weakness--even his major wound in the midst of the big island battle is a) manly and b) Christ-like (don't worry, I'm (probably) not running a Christ-Figure analysis on this one) and it gives him an extra opportunity to show off his manly physique. His only weakness is that they took his daughter, and we have no reason to doubt that he will get her back.

(An aside: Rae Dawn Chong's Cindy is also quite the rugged individual, a flight attendant--no, this is the 1980s, so she's still a stewardess--who is getting her pilot's license and does not go to bed with our hero. Not that there's time for that without the countdown running from the moment Matrix gets off the plane.)

Arnold Schwarzenegger's John Matrix is not only an example of the rugged individual who can take care of himself, but, even having come from Germany, he is the quintessential American male, more of a man than every other man around him. He is also a remnant of the Cold War, and it is not a coincidence that he is both of these things. The American male, masculine without question, rugged and capable--the kind of guy John Wayne played--that was destroyed by a series of wars, the big one being Vietnam. Martin Riggs, John Matrix, John Rambo--these men were all special forces because that is some American ideal of what manhood can be. It's patriarchy and paternalism and some basic belief in the use of force to get what you want twisted into a musclebound package. 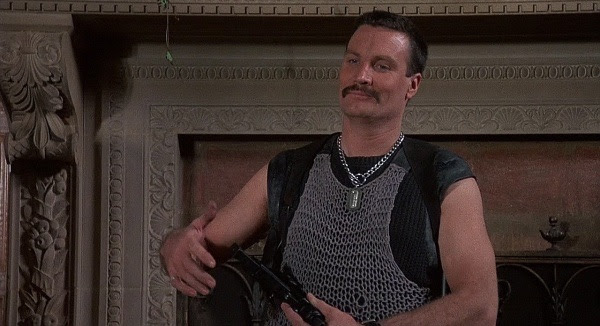 Counter the appearance of Matrix here (or Rambo or Riggs) to the secondary villain Bennett (Vernon Wells), who dresses like a Mad Max reject or a guy from an S&M club, with his leather and his collar and his chainmail. For the character of Bennet, masculinity seems more like a veneer he's wearing whereas John Matrix barely fits inside his own clothes. Like Right Said Fred, he's too... well, too much of a man for his clothes. It's somewhat ironic that the movie positions him as a single father living a domestic life away from the violence of his military past. It's almost as if this film is presciently wondering what will become of American military men with the Cold War expiring.

Essentially, this film could be taken metaphorically as a statement about how our foreign policy can come back to haunt us. Except, our hero is such a big, strong, capable man that whatever comes back to haunt him he can defeat. And, that's why we like the movie. No matter what comes, we can beat it. We're John Matrix and no one will ever take anything from us without paying the price. It's American foreign policy in a nutshell; maybe we would like to try to live peacefully in the mountains but when it comes right down to it, we're just biding our time until Major General Kirby or Colonel Trautman shows up to tell us there's someone new to fight.

With rugged individualism, that's all there is, really. Everything turns into a fight, or at least an opportunity for the utilization of force. If something isn't working out, then you just aren't putting in enough effort. There's never any larger structural forces at work, of course. That would be silly.