So, consider yesterday a part one to today's part two about the character of Martin Riggs. We are not accounting in any way for Lethal Weapon 2 or 3 or 4, just the original. Also, consider this a part... whatever part it may be to my original Kozlovik post about Phil Connors in Groundhog Day. Yes, ladies and gentlemen, it's that time of the week again in which we compare our protagonist to Jesus Christ.

Let us just get into it--taking our list from Kozlovic (2009) as usual. (And stick around for the twist ending.)

#4 - arrives through outside intervention... this one may be a stretch, but Martin Riggs is transferred into Roger Murtaugh's life just as a new case arrives and he is instrumental in is solution. Which makes me wonder, momentarily, if anything would be different without Riggs. Well, he does save Murtaugh from Amanda's... I forget what they call him in the movie, the guy paying her bills. The script calls him her "meal ticket." I mean, the guy who dies in the swimming pool. Anyway, I'm giving this one to Riggs. (4/4)

#5 - alter ego, dual identity... while Riggs literally is working undercover (i.e. with an assumed identity) when we first see him on the job, the key to how others see him is that they don't know if he is crazy or faking. There are two different versions of Riggs they see. I'm giving it to him. (5/5)

#6 - appear mundane but are special... Riggs is not only a cop--a fairly normal job--but rather casual with his appearance, definitely mundane. But, then you get to his sharpshooting and his martial arts skills. (6/6)

#8 - divine mission begins at age 30... nope. The movie never tells us Riggs' age, though I read online that he's supposed to be 38--maybe a later entry in the franchise establishes his age. He was in Vietnam at age 19 and in Vietnam in 1969, but the movie does not put those years as necessarily one and the same. Even if he was 19 in 1969 (making him 37 or so in the movie), his divine mission, whatever that would be, couldn't have started seven years ago because he was happily married then (or so we are meant to assume). (6/8)

#9 - Judas-Figure nearby... nope. Hell, the plot here has no particular twists at all in the betrayal section of story beats. (6/9)

#10 - Mary Magdalene-Figure nearby... This one is interesting because my impulse was a no until I looked at Kozlovic's description again. He describes Mary Magdalene-Figures as "sexually tagged women who are related to the Christ-figures in some close way, but do not know exactly how to express their sexuality with them." That description actually fits Rianne Murtaugh. She immediately has a crush on Riggs. Her siblings rap about it. At the end of the movie, Riggs comments on it. And, in Shane Black's script, it is more specifically suggestive:

RIANNE
They say you're the best.

Beat. He stops. Turns and looks at her.

This may come up again in the next couple days, but Rianne is aso specifically sexualized by the General and his people. They strip her down to undergarments and the General comments on how pretty she is. "That's a real good looking young women you've got there," the General says. Not as creepy as in the script--"Good Lord. Very wholesome-looking girl. Yessirreee."--but pretty bad. She implication is clear. The General is going to do something to Rianne to get Murtaugh to talk.

Plus, there's the initial victim as well--Amanda Hunsaker--a prostitute who is also involved in pornographic films. There are definitely "sexually tagged" women around. (7/10)

#11 - John the Baptist-Figure nearby... this one is weird because Riggs does have another character "point[ing] the way to" him, as Kozlovic describes it. Except, the character in question--the police psychologist--is trying to get people away from him. She's actually a sort of reverse John the Baptist-Figure. She does "diminish as the Christ-figur[e] grow[s] in importance" in the story, just as a "Good Baptist-figure" does according to Kozlovic. I'll give Riggs this one, but with an asterisk. (8/11)*

#12 - dies and "miraculously come[s] back to life again as good-as-new, if not better" ... Riggs does this more than once. He jumps off a building, surely to his death. Nope, air bag. He is gunned down in the street. Nope, bullet-proof vest. He is tortured by Kendo and hangs limp. Nope, he's just biding his time. (9/12)*

#13 - holy death results in "triumphal victory" ... Well, Riggs being believed dead after Joshua shoots him in the street gives him and Murtaugh an advantage in the fight the next morning--victory #1 until they don't quite win the fight. His recovery from electrocution, on the other hand--victory #2--leads directly into he and Murtaugh seizing the upper hand and winning. (10/13)*

#14 - sacrifices benefit others (of "lesser" worthiness)... Hell, this is a nice descriptor for all good cops. Since I may say some not-so-nice things about cops in the next couple days, I want to give this one to Riggs. (11/14)*

#15 - "choose sacrifice out of their newfound knowledge, status, position or cosmic mission requirements" ... can a suicidal guy choose to sacrifice himself for a new reason? I mean, Riggs gets into that whole "World War Three" thing in Act Three not just because of the "the job" and there being bad guys but because it has gotten personal. Since, I've already given him one iffy point, I will not give him this one... but I think I will take away the asterisk. (11/15)

#16 - accused of crimes but innocent... This is not strictly true of Riggs, but Kozlovic's description of Jesus not protesting his innocence when held as a prisoner reminds me of Riggs' not defending himself as either crazy or faking it. He just presents himself as is. Technically, faking insanity to get his psych pension is probably a crime, so I'll give him this one. (12/16)

#17 - cruciform posture... while Riggs is hung up and tortured, he is quite specifically not in this pose. He almost gets the pose going when he jumps off the building handcuffed to the jumper, but that's incidental. Same with getting shot and flying backward through the window. (12/17) 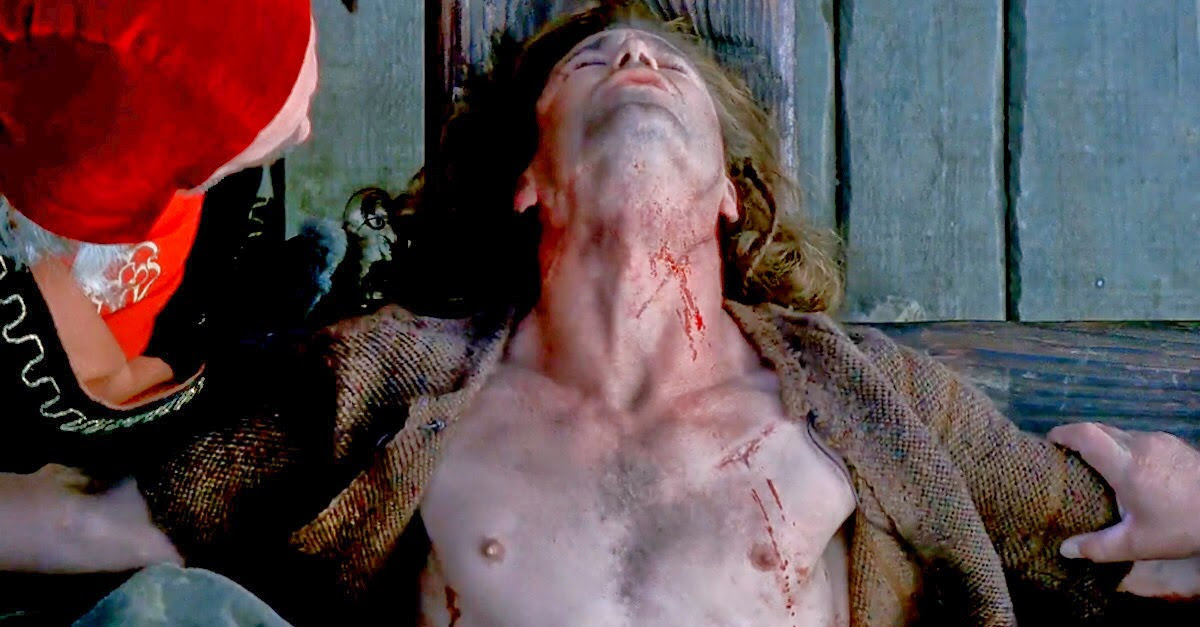 Instead, enjoy this shot from Braveheart.

#18 - accompanied by cross imagery... not really. Not even, despite the prevalence of shooting, the crosshair reticle in his rifle lens. --coming back after finishing the list to give Riggs this point for his tattoo. The crossguard of the knife wouldn't be important if it were just a random tattoo but the movie specifically uses that tattoo to identify Riggs (and Joshua). (13/18)

#19 - miracles... I already counted his jump off the building under dying and coming back or it could fit here. His sharpshooting could fit here also. I just kinda want to give him this one. (14/19)

#21 - pronounced poverty... Riggs lives in a trailer and does not wear suits like the other detectives. Or is that explanation, as Riggs might say, "pretty fucking thin"? (16/21)

#24 - verbal tags... while there is plenty of blasphemy in this movie, an hour in right now, I haven't noticed any directed at or around Riggs yet. (17/24)

Not a great score. Then again, Walsh (2013) warns, "claims about Christ figures in film often use 'Christ' quite loosely" (p. 81). Additionally, "almost any hero(ine) can be seen as Christlike in some way," Walsh claims before citing Reinhartz' "Jesus and Christ-Figures" from The Routledge Companion to Religion and Film. Reinhartz says, "Indeed, it may be said, with only slight exaggeration, that Jesus Christ, or someone who resembles him, is on view at every Cineplex in North America at any given moment" (p. 430, cited in Walsh, p. 82). Just as I have argued that all of our stories share some important fundamental structural and thematic elements, sure, all of our heroes share some of the above elements not necessarily because they are supposed to be Christ-like--surely, Shane Black did not intend Martin Riggs to be a stand-in for Jesus Christ--but because the Christ story shares elements with the rest of them. We only keep coming back to Christ because he happens to have gained more import.Literarily, we could just as easily compare characters in modern action movies to Frodo Baggins or Parsifal. Both of these are, of course, Christ-Figures. Larsen (2013) simplifies it:

If any figure who dies and returns; any figure who offers sacrifice in any way; any figure who comes from another world to do good, is a Christ figure, then how is Jesus all that different from so many of our movie heroes? At what point does Superman become less like Jesus and Jesus more like Superman?

Larsen suggests that atonement is the unique element of the Christ story that movies cannot quite capture. I dealt with this topic in regards to Groundhog Day before. Strangely, I think Riggs actually does display some semblance of this atonement in that he is "killed" because of others. Amanda Hunsaker was pulled into the underbelly of Los Angeles because of her father, (probably) not because of her own choices. She was sacrificed to the ex-Shadow Company beast. Riggs (and Murtaugh as well) takes his shots, takes his hits, is tortured and left for dead, for her.

Or maybe that, too, is thin.

Walsh suggest that "a modest christ-figure analysis would assay a meaningful, interesting interpretation of the film in question" (p. 83). That is, a Christ-Figure, if we are conservative in our interpretation, can only come from a film that fits that character. As Kozlovic (2009) suggests, "seemingly secular films can engage in profound religious storytelling without appearing religious" (p. 2). But, Lethal Weapon is not one of those films. Groundhog Day still is. But, Lethal Weapon is just another action movie from the 80s. A particularly competent action movie, but still not really suggestive of great religious storytelling or profundity.

Larsen, J. (2013, June 18). Man of Steel and the tiredness of Christ figures. think Christian: no such thing as secular. http://thinkchristian.reframemedia.com/man-of-steel-and-the-tiredness-of-christ-figures