way behind the times

(A note or two: I had intended to write about Shane Black's script but I neglected to read it today because, New Year's Day and all, I got caught up in a Mythbusters marathon on TV, dismantling a LEGO thing I made at the end of summer and haven't had time to take apart yet, and playing some Smash Up. Also, I have decided to give Lethal Weapon seven days, and reduce to only six days a different action film later in the month--I won't spoil it completely by listing off every movie... and I had to doublecheck whether or not I had already listed the five action movies in my recap post the other day; I did not.

I must interrupt this lame parenthetical to point out that, from what I read, the "car" you see as Amanda Hunsaker falls toward it is not actually a car but rather a painting of a car and part of the street on top of an airbag, so they could film from above as she fell. I read about this when I was looking up Dar Robinson, to whom the film is dedicated. He was a stuntman and Lethal Weapon was one of his last films. He actually died on the set of Million Dollar Mystery, which, since I will be talking about the 1980s below, it is worth mentioning was a tie-in with Glad bags, a nice capitalist gimmick. Jackie Swanson, who plays Amanda Hunsaker, actually did the free fall for the stunt herself, and it was her first movie.

Lethal Weapon actually provides me several ins for some interesting topics, ranging from race relations to gender issues (again) to American hegemony (which I've already mentioned in the last couple days). But, I was up late for New Year's Eve, and was "busy" not working on some school stuff I've got to do before the winter quarter starts next week, so I have not done any research for the more serious stuff today.

Another interruption--and Maolsheachlann should appreciate this--Lethal Weapon was, according to IMDb, the first movie to feature a cell phone. It's a 1980s cell phone, big ol' thing wired to a box. But, if one wanted to track cell phones in movies, you start here, definitely make a stop at Scream for the cop asking the kid why he has a cell phone as if that alone is suspicious, maybe stop at The Call and if the movie version of Stephen King's Cell ever happens, think about ending there. And, if you want to get into phones more generally, backtrack of course to the likes of When a Stranger Calls or Black Christmas.

I could always fall back on Roger Ebert's review of the movie, which is a go to for this blog. He called Lethal Weapon "another one of those Bruised Forearm Movies like 'Raiders of the Lost Ark'"--ooh, there's a movie I should watch for this blog sometime, but are there enough adventure movies worth writing about? I mean, sure, I did argue once in this very blog that every movie deserves to be analyzed, but I have to make choices when my time is limited.

Another interruption, because locations interest me, generally, but even moreso sometimes with Los Angeles-set movies because I know some things just aren't that close together, or traffic at that time of day just won't let you get there that fast or whatever. For example, Murtaugh and Riggs were just getting lunch across the street from the Wiltern Theatre, then they get a call about a jumper and head over to the Emser Tile Building. There were probably better units to take the call because 1) (and I'm not sure about this one) do homicide detectives really deal with jumpers? and 2) it was nearly 6 miles away. I actually did not recognize the Emser building specifically, but happened upon its location while trying to figure out if Mel Gibson made his jump like Jackie Swanson did.

Interesting sidenote: if you pay attention as Riggs and the jumper make their jump, they grab hands. I'm guessing holding hands was safer for the stunt than a chain between them. In fact, you can also see just before they grab hands that there is no chain there anymore.

I cannot just watch every movie available. Hell, even this week, I'm tempted to watch the sequels to comment on where this franchise went. But, New Year's an winter quarter preparation, not to mention setting up some travel arrangements for an away tournament with the speech team next week, means I don't necessarily have time to watch three extra movies this week. Hell, it's also Oscar season, so I've got new movies to watch.

The whole family and Riggs laughing together--that is like Hollywood shorthand for acceptance. Riggs is a part of the family now.

The good thing, regarding the trip next week, is part of this blog has gotten easier lately. I have written about my Groundhog Day Project binders before. I've got four full binders of research material from before I even finished the year of Groundhog Day. Five if you include the binder full of Christ-Figure material. Binder #5 has pieces about The Ring, The Sixth Sense, The Blair Witch Project and Scream. The slasher film material, because of Scream is in Binder #6. Binder #7 is romantic comedy material. And, Binder #8, which the number 8 appropriately could also be an infinity symbol, may just last me the rest of the second year because I just don't need to print so many of my sources anymore. I recently got a new phone, which I keep handy next to my iPad as I write these things, so I just open up the source there and don't need it on paper, unless it's something big. Shane Black's script for Lethal Weapon, for example--I've got that on paper because I might want to highlight some of it.

Riggs announces that the kids who were playing around Dixie's house are 6 years old before he sees them. Were I spending even more than seven days with Lethal Weapon I would probably spend an entire entry arguing that Riggs is actually psychic. I mean, there's obviously something preternatural about him already with his sharpshooting skills.

Potential problem, but nothing big--I'm not sure Riggs' tattoo is visible except in the scene it is pointed out. And, we see him naked earlier and shirtless later.

Anyway, Binder #8 starts with Planes, Trains & Automobiles and is not even half full after two months and 8 movies. But, I was quoting Roger Ebert, wasn't I? Before I get back to his line from above, I think "Bruised Forearm Movie" sounds negative. But, he means better. "'Lethal Weapon' is another one of those Bruised Forearm Movies, like 'Raiders of the Lost Ark,'" he writes, "a movie where you and your date grab each other's arm every four minutes and you walk out black and blue and grinning from ear to ear." Seems positive enough. Later he adds:

The movie's so tightly wound up, it's like a rubber band ready to snap. Richard Donner, the director, throws action scenes at us like hardballs, and we don't know when to duck. All of the elements of this movie have been seen many times before--the chases, the explosions, the hostage negotiations--but this movie illustrates a favorite belief of mine, which is that the subject of a movie is much less important than its style. I'm a guy who is bored by shootouts and chase scenes.

I've seen it all. But this movie thrilled me from beginning to end.

He gets back to the style later...

Now about that matter of style. In a sense, a movie like "Lethal Weapon" isn't about violence at all. It's about movement and timing, the choreography of bodies and weapons in time and space. In lesser movies, people stand there and shoot at each other and we're bored. In a movie with the energy of this one, we're exhilarated by the sheer freedom of movement; the violence becomes surrealistic and less important than the movie's underlying energy level. 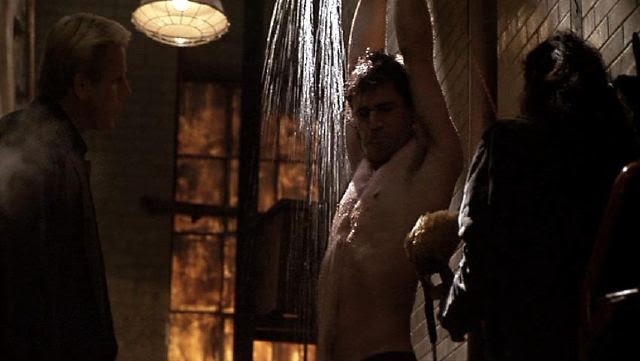 I think a lot of 80s action movies work this way, turning violence into something bigger than just something brutal. Me--I can appreciate some really brutal violence in a film, but something more balletic like when Riggs strangles his torturer with his legs because his hands are tied up--that definitely suggests some style. And, while the director is a big part of that, I think in this case, a lot of that comes from Shane Black and the way he writes a script. So, I really should read that thing already so I can write about it. Maybe tomorrow.)

Now, what shall we talk about today?