what are you expecting? world war iii

In 1985, Siskel and Ebert did a special episode about how Hollywod was "selling war" to children. This was in response to movies like Rambo and Commando, which gave us a very different view of war and violence than older films like, say, The Deer Hunter. War was a commodity to be sold and enjoyed. The last big commercial product of the Cold War was large scale violence as spectacle...

Except, that wasn't really something new, was it? The tone had changed (again), but war and violence had been spectacles to be sold for a long time. In the 1980s, though, it seems like that spectacle was quite mundane and almost common. Not just the R-rated action movies or slasher films, but also more "family-friendly" films like Iron Eagle or Russkies.

But, I don't really feel like reiterating the same point again today. Simply put, Americans love violent films and in the 1980s we loved them a little extra. And, Commando is so obviously built around the idea of the United States manipulating foreign countries' governments, putting the dictators we like in charge, that I don't feel like writing an entire entry about that either.

I'm tempted, instead, to write something personal. For my Master's Thesis, I've been looking into autoethnography (and we're getting into that in Performance Studies class as well), and it occurs to me that so much of what I argue here about films comes from my personal experience as much, if not more than, research. I like to put films in context in terms of what I was seeing at the time. And, I love to pick apart bits and pieces of movies based on, well, what I think. Subjectivity is inevitable.

That being said, I enjoyed Commando immensely when it came out. I was a 9-year-old boy. Why wouldn't I enjoy it? I knew the jokes were corny and Rae Dawn Chong was whiny and there wasn't much acting going on at all, but I didn't care. In the first 15 minutes there were multiple deaths and already an explosion. By the end of the film, there were close to a hundred dead (not counting whoever was in all those buildings Matrix blows up) and several more explosions, limbs chopped off, a car chase, and the promise of a sequel (that would not quite happen). This was joy for me. And only a few months after Rambo was out. American Ninja, Code of Silence, Invasion U.S.A., Mad Max Beyond Thunderdome, Remo Williams, Red Sonja--all movies with a bit of violence that came out that year. The heart of the 1980s.

So, why was that violence so enjoyable?

I think it was a couple things. First, the obvious: we like violence. We don't like when it's perpetrated against us, and we're not always fans of it at all in reality, but give us some violence on the big (or small) screen, and we go for it. It's exciting. It's something we (hope we) don't get to experience in reality. Most of our lives, even as children, are boring, the same thing day in and day out. We dream of doing things Matrix does in the movie, from swinging on that balloon thing at the mall to chasing another car down the road at high speed. We dream of being the hero who takes out the bad guys. Or we dream of being that girl who gets swept up in the hero's wake. Excitement like this is not normal. But (generally), we don't go to the movies for normal. We want something bigger than life. We want something funnier and more exciting.

We don't even care that John Matrix is killing all these people on U.S. soil, that he's basically a mass murderer, that Cindy even risks killing police officers that are just doing their job. All we care about, sitting there in the dark, is that the good guy wins and the bad guy loses. Because, that is clear cut. That is white and black, and we live in a world of greys. 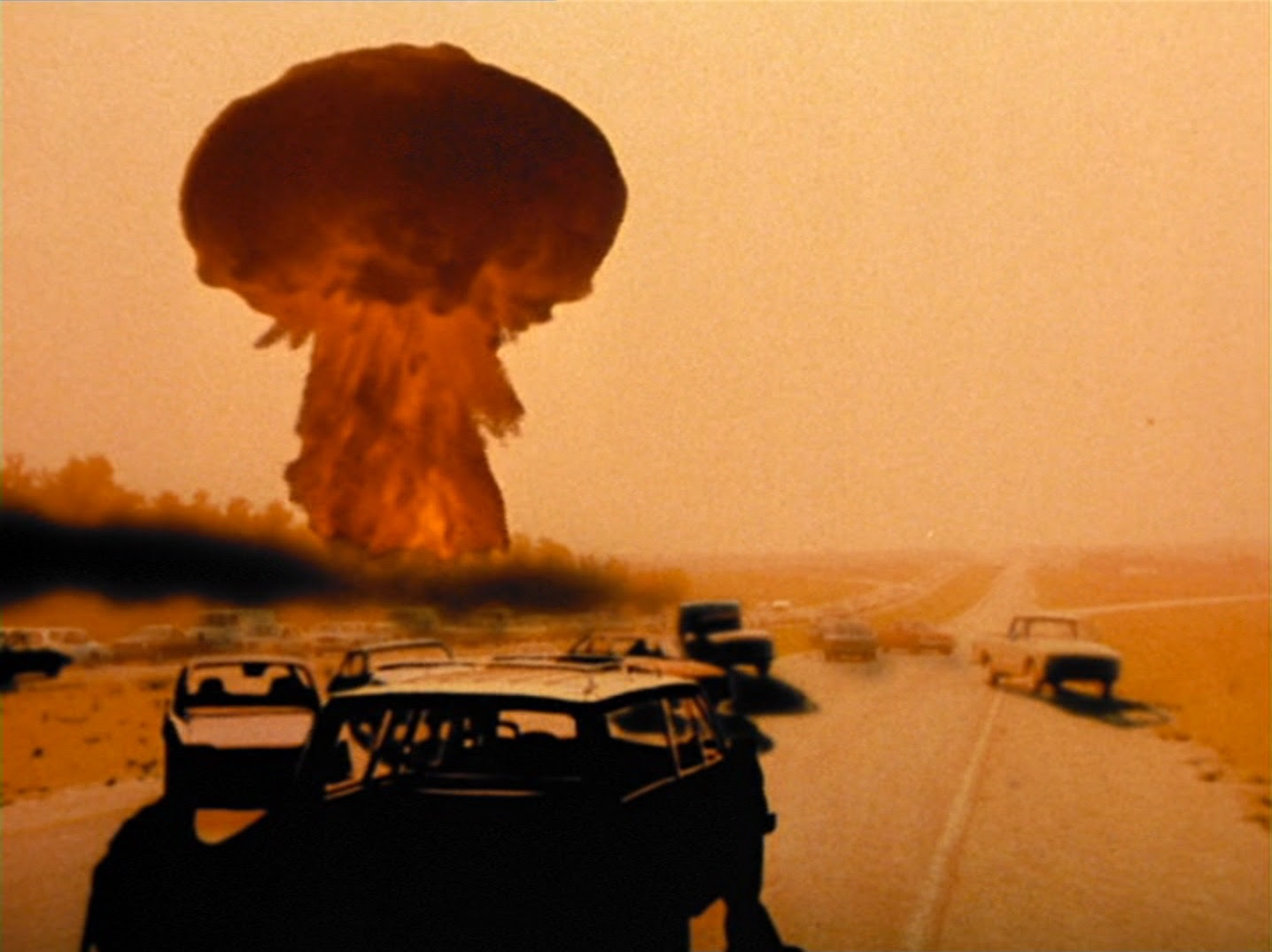 I remember when I was a kid, growing up in a church that taught us the world was coming to an end. And, popular culture kept teasing us with World War III. National Geographic Channel was airing a series of shows over this past winter break called The 80s: The Decade that Made Us, and one of the things they talked about was The Day After, a TV movie that aired in 1983 and was basically about the nuclear exchange that would destroy the world as we knew it. It was seen by over 100 million people when it aired, and is still (apparently) the highest rated TV movie ever. I remember watching that movie. I remember the horror and, again, the spectacle. Not as graphic as the nuclear explosion dream sequence in Terminator 2 but still pretty visceral. And, at the time, still seeming like a real possibility. Good guys, bad guys--these distinctions wouldn't matter if it came to nuclear war. I grew up (and still live) around Los Angeles; I'm pretty sure we would be on the list of targets in a nuclear exchange. But, the point is that if there were no good guys and no bad guys, there was no way out. I was only six when The Day After aired. And, the possibility of that happening was scarier than the prospect of a nice happy Christian afterlife was reassuring.

So, of course I latched onto stories with good guys beating bad guys. I was young, I was naive, and I wanted a world in which it was possible to a) know who the bad guy was and b) beat him. I loved action movies. I loved spy movies (primarily James Bond fare at the time). I loved horror films. It was only as I got older and a) more convinced in my lack of faith and b) more convinced that nuclear war was, as Baudrillard puts it, "an act of the imagination" that I really got into more morally ambiguous movies... Or maybe it was just that I was old enough to pick movies myself and I wanted to see everything. There were always more movies to see and to enjoy. I saw so many growing up, in theaters, on video, on TV, but I wanted more.

Or, maybe it's a chicken and egg thing.

Maybe I feared the horror of World War III because movies convinced me on a regular basis that bad guys existed. Just because the hero could beat them in the context of a specific story didn't mean that the bad guy could always be beaten.