these guys eat too much red meat

Maolsheachlann raises an interesting point as comment to yesterday's blog entry: "You could be a pacifist and a rugged individualist, though... Radical libertarians tend to be very distrustful of armies and wars."

My response (and it leads into today's topic or I would just put it in the comments section):

1) I don't think--and I'm risking a True Scotsman logical fallacy here, but I'm going to go for it anyway--a true pacifist could ever be a rugged individualist. To me, pacifism comes hand in hand with collectivism. There is no point to peace without other people. 2) While I suggested--and still do suggest--that rugged individualism favors the use of force, that force does not have to come from a State's army, nor does it have to come in the form of war.

My problem with the standard critique of masculinity and femininity in movies is that movies show us ideals. They inevitably (and desirably, in my view) simplify everything, including gender differences. I think movies satisfy a need for idealization and part of that is an idealized view of the opposite sex and of our own sex.

To that, I must say: exactly. And, in 1980s Hollywood, we see again and again men like Arnold Schwarzenegger or Mel Gibson or Bruce Willis or Sylvester Stallone. This was our ideal at the tail end of the Cold War. We liked our men to be particularly masculine and capable, and if they did show weakness, they had to make up for it with violence. Look at Martin Riggs in Lethal Weapon, for example. He is emotionally vulnerable, suicidal, but then to excuse that he's also a bit crazy in some more interesting and entertaining ways. And, ultimately, his unhingedness leads to a lot of death and eventually that front lawn fight. Commando also climaxes, after a whole lot more shooting and explosions than Lethal Weapon, with a physical fight. Bennett and Matrix go at each other with knives after putting down their guns; the fight is more mano e mano. It is about masculine body facing off against masculine body. There is no army involved anymore. Matrix was (mostly) by himself the entire time, but now even Arius' apparent army--

(And, wouldn't it be funny if that military base on that island, which is off of Santa Barbara, by the way, had nothing at all to do with Arius? Matrix just starts blowing people up and shooting people and stabbing people, when he's the one invading their base.)

--is out of the picture, all dead or cleaning up the mess of all the dead. Because the final fight takes place in some steam tunnels (or whatever those are), we don't need Murtaugh keeping the modern authorities at bay while a more primitive battle goes one. It just gets to happen. John Matrix has left the army behind, left behind the larger militaristic forces of State against State. He rejected those things to live a domestic, but rustic, life with his daughter. Still, what does that entail? Our introduction to the character is a chainsaw; he's cutting down a tree which he then carries a good portion of back to his house to chop up with an axe. John Matrix is quite literally rugged.

He has also taken on feminine roles as well as masculine in raising Jenny. He is father and mother. And, I think that often, in film, discussions of the individual and gender are inevitably omnipresent. Every film tells us something about the people who made it, something about the audience for which they intended it. If there were fewer genres, it would be much simpler to navigate; feminism in the 1960s led to a) slasher films and b) very testosterone-heavy, violence-driven films in the 1970s and into the 1980s. The Vietnam War, like World War II had, brought us a little sensitivity for our male heroes so there is a constant struggle between the masculine "quest" and the damage it does, the toll it takes on our hero. John Rambo, in the novel First Blood has been driven fairly insane by his experiences in war, by seeing his friends killed, by being tortured. The film version isn't quite as bad, but he is close. A man trained to kill then left with no enemy to kill. Similarly, Martin Riggs and John Matrix killed and killed well, but have turned their lives to other pursuits. Riggs, being a cop, may be the closest to using his skillset in his post-war life. But then, with the likes of John McClane, or Harry Callahan and Paul Kersey (the latter two coming out of the 1970s, mind you), we see that, in Hollywood, you don't need military training to kill a whole lot of people. You just need determination and maybe the love of a good woman.

But, let's backtrack a little. I mentioned feminism in the 1960s, but there was more than just feminism. James J. Farrell (1997) in The Spirit of the Sixties: The Making of Postwar Radicalism argues that most women in the 1950s "had been taught to value the self-in-relation, rather than the rugged individualism of masculine America" (p. 136). The self-in-relation as opposed to the self-in-isolation. Farrell continues: "They acted in the name of children, whom they defined as victims, both present and potential, of nuclear testing and nuclear war." He calls this "maternal pacifism." Commando, on the other hand, is built on paternal antagonism. But, it's lead character, like many of the most masculine heroes of the 1980s does have a softer side. That combined with his musclebound body make him just a little sexier for the women in the audience and, well, for the men as well. Arnold Schwarzenegger is no longer the machine he was in The Terminator but something at least a little bit more human. 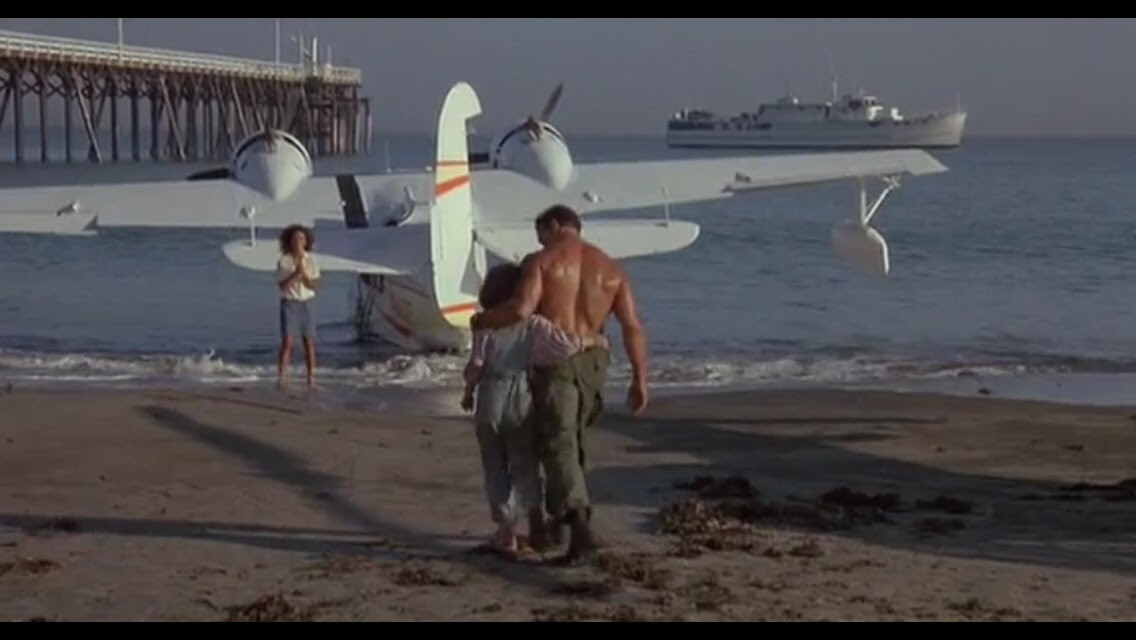 And the movie ends with a reconstructed family unit flying off together as the representative of patriarchy, and all that comes with it, watches and smiles approvingly.