there's no more heroes left in the world

Shane Black's Los Angeles is "a bargain basement Promised Land." He likes sunny days and rainy nights. He likes to juxtapose domestic normalcy with the seedy underbelly. And, he likes to put flawed men at the center--these are the damaged angels for which the city is named. In Lethal Weapon we have two of these men as our protagonists: Roger Murtaugh and Martin Riggs. RM and MR. Mr short for Mister, but one must wonder is Black suggesting that Martin Riggs or Roger Murtaugh is the quintessential male, or at least the quintessential 80s male, or at least the quintessential 80s action male. The interesting thing is, as the story goes, in Black's script--I don't know what draft I have, but it's not the first--a little more than in the film, Murtaugh becomes a little more like Riggs along the way and maybe, just maybe, Riggs becomes a little more like Murtaugh in exchange. Imagine the partnership if Mr. Joshua and the General had managed to kill (after perhaps raping, but that's a detail for another day) Rianne Murtaugh--then the two men would have been even more dangerous.

A note to start: Murtaugh asks Riggs at the shooting range if he sleeps with his gun under his pillow. Riggs, indeed, sleeps with his gun, but on a pillow. Riggs is what we expected from an action hero of the time, a little bit crazy, a whole lot of dangerous and extremely capable. We liked our heroes to be good enough to take on a whole lot of bad guys and come out on top. Of course, we also liked it when our heroes took some hits in the process. Riggs, it becomes obvious pretty early in this movie, has already taken some hits. He's deeply damaged even beyond the loss of his wife. But, hey, he's funny, so we can like him. In Black's script, even before the Christmas Tree Lot scene, Riggs faces some guys giving a dog trouble. At one point one of the men

So why then, does he choose this moment to execute a Three Stooges' routine, consisting of nose tweak, eye gouge, and rotating fist that bobs the dock worked on the head... ?
He's nuts or something ... (p. 5)

First of all, yes, that's how Black writes, commenting on the action as he goes, more like a storyteller than a scriptwriter. Second of all, like the bit at the Christmas Tree Lot in the film, Riggs jumps to Three Stooges-style comedy just as he's on the brink of committing some violence. Just like the conversation between his captain and the psychologist, this puts Riggs on the border between two different kinds of insanity; as Riggs puts it:

It is not a coincidence that Mel Gibson would later star in a film version of Hamlet; supposedly, he was sought for that based on his performance in his suicidal scene here. Regarding Hamlet, there is debate as well, whether or not he's crazy or faking it. In a paper I wrote back in high school, I argued that a) Hamlet was faking it but b) it did not matter, because if you fake it enough then you might as well be it. Something along those lines anyway. Similarly, it barely matters what Riggs is, though, as I previously argued, that trailer scene is there so we in the audience know for sure that he is not faking it. Like Phil Connors in bed with a sleeping Rita, the scene is an honest representation of the character, absent witnesses but for the audience.

Black has a lot to say about Riggs. Standing in his "living room" alone and naked, eating a sandwich, Black comments: "What a lonely fucking guy..." (p. 12). Of course, in the script, he's got a bottle of pills he contemplates at night, not a hollow point bullet. Generally, pills are said to be a woman's suicide method. Guns are masculine. Black's script calls for Riggs to be just a little... less masculine, but then again, Black's script has that bit about 80s men being able to show their feelings. He also has a designated last cigarette in the script. It's got a red mark on it and he tells Murtaugh, "This one is the last cigarette I'll ever smoke. Trick I learned from my dad. I smoke all I want, but when I smoke this one ... I'm through." In the midst of the Third Act action, he smokes that cigarette without noticing it--not until after, anyway--and that's an extra way the script lets us know he's moving on from the suicidal thing... or, alternatively, it could be a sign that he's ready to be done. The script actually ends with Riggs getting his "psych pension." They may have even filmed that version because the scene also includes Murtaugh saying he's thinking about retiring and Riggs telling him not to; that alternate scene is supposed to be on the Lethal Weapon 4 DVD. Really, the last cigarette thing combined with the psych pension suggests a very negative note for the ending, to me. Riggs specifically tells Murtaugh that it is the job that keeps him going. Without it, who will he be? 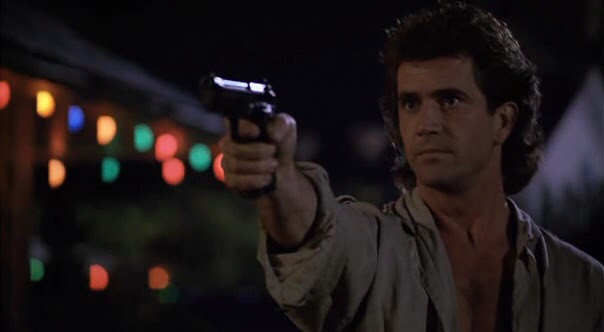 One notable Riggs scene--meaning, it adds more to the character than, say, his opening fight with the three guys messing with the dog--that is in the script but not in the movie, is Riggs picking up the (probably) underage prostitute to take home to watch TV with him. He gives her a hundred dollars and he ends up watching over her as she watched the Three Stooges.

He wears a melancholy expression. The world is full of happy families like Murtaugh's, but he has to get by like this.

After Rianne is taken by the bad guys, "Riggs' face contorts into a look of sheer, brutal hatred" and we get one of Shane Black's great script lines: "Get ready for World War Three" (p. 83).

But, before we get to that World War Three we get another notable scene that doesn't make it into the film. Six-year-old Carrie Murtaugh walks in on him because she can't sleep. He is shirtless, removing glass from his shoulder. After a brief exchange of dialogue about the cat...

Carrie looks at him then.
And she does a peculiar thing.
Slowly, she reaches out ...
Riggs looking on...
And touches his back. Runs her tiny hand over the knife scar beneath his shoulder.
Fascinated by it.

Riggs looks at her. Smiles, and whispers softly:

And he suddenly hugs the little girl for all he's worth. Closes his eyes tight.

In that moment, every single year catches up to Riggs, and he looks, for a moment, incredibly old, and so very, very tired ... (p. 86)

A page later, he's "a machine ... and the machine is, well ... revving up." That World War Three is coming. A page after that, wearing desert fatigues, combat webbing and desert boots, with "desert paint" on his face, and Black says, "Surely he was never married ... not this demon..." Later, he's "a fucking juggernaut" (p. 104). But, first there's this--it's long, but it's awesome:

Rianne screams. Murtaugh shouts. Strains. The chair thumps up and down, creating an insane, staccato rhythm. The General laughs. Rianne shrieks. Harrowing. Terrible. A scene out of Hell. And then the Devil comes in and kicks the door off its hinges. Okay. Okay. Let's stop for a moment. First off, to describe fully the mayhem which Riggs now creates would not do it justice. Here, however, are a few pointers: He is not flashy. He is not Chuck Norris. Rather, he is like a sledge hammer hitting an egg. He does not knock people down. He does not injure them.

He simply kills them. The whole room. Everyone standing. Except for -- the General, who ducks out a side door and escapes ... Riggs' chain moves like a live thing. Snapping here. Striking there. Mercs try to draw their guns -- And suddenly their hands are shattered wrecks. One merc draws a bead on Rianne, almost gets off a shot, because Riggs is across the room. Without missing a beat -- Riggs throws the chain. It wraps the guy's neck and kills him instantly. Ouch ... He goes down, FIRING useless ROUNDS into the ceiling. Plaster rains. Riggs spins, dives. Scoops up the baseball bat. Comes up beside an armed merc -- Swings the bat with hurricane force. A sickening impact. The bat breaks in half. Riggs spins, combat-ready. Scans the room. No one left to kill. Using only the element of surprise, he has taken out an entire room in hand-to-hand combat. He steps in front of Murtaugh without missing a beat. Cuts him loose with a borrowed knife. (p. 102)

Martin Riggs is not, strictly speaking, human. When he fights Joshua on the lawn, it is "a dance of the forces" (p. 111). And, for a while, it seems like Riggs is losing. Then...

A moment ... and then, my friends, Riggs does a peculiar thing: He smiles then. Damned if he doesn't. And rises up ... Standing. Standing straight. There is no way he should be able to do this. And then he speaks, and it's like the voice of doom, and all of a sudden we know that this guy is a fucking legend, we know why the V.C. enforcers whispered his name at night in the foxholes ... He is Riggs. And no one can touch him. No one. (p. p. 112)