who said we were terrorists?

Start with a plane landing, let us know this guy's from out of town. Nice start. Setup him taking his shoes off, so he's a little off kilter later...

But, let's talk commonalities. Like Lethal Weapon the year before, it's Christmas (Christmas Eve, actually, if tech guy Theo can be trusted). Got a white cop and a black cop (though a much smaller part for Reginald VelJohnson than Danny Glover). The family here is mostly absent, and definitely "broken." Of course, the marriage is as Hollywood-magically fixed as Martin Riggs' depression.

(Actually, that's not fair. I suppose that John McClane has realized that he can kill bad guys in California just as much as he can kill them in New York, so moving out here now to be with his family has become something easier to do. The marriage itself actually seems relatively okay--he and Holly do seem to miss each other before they start arguing about her using her maiden name.) 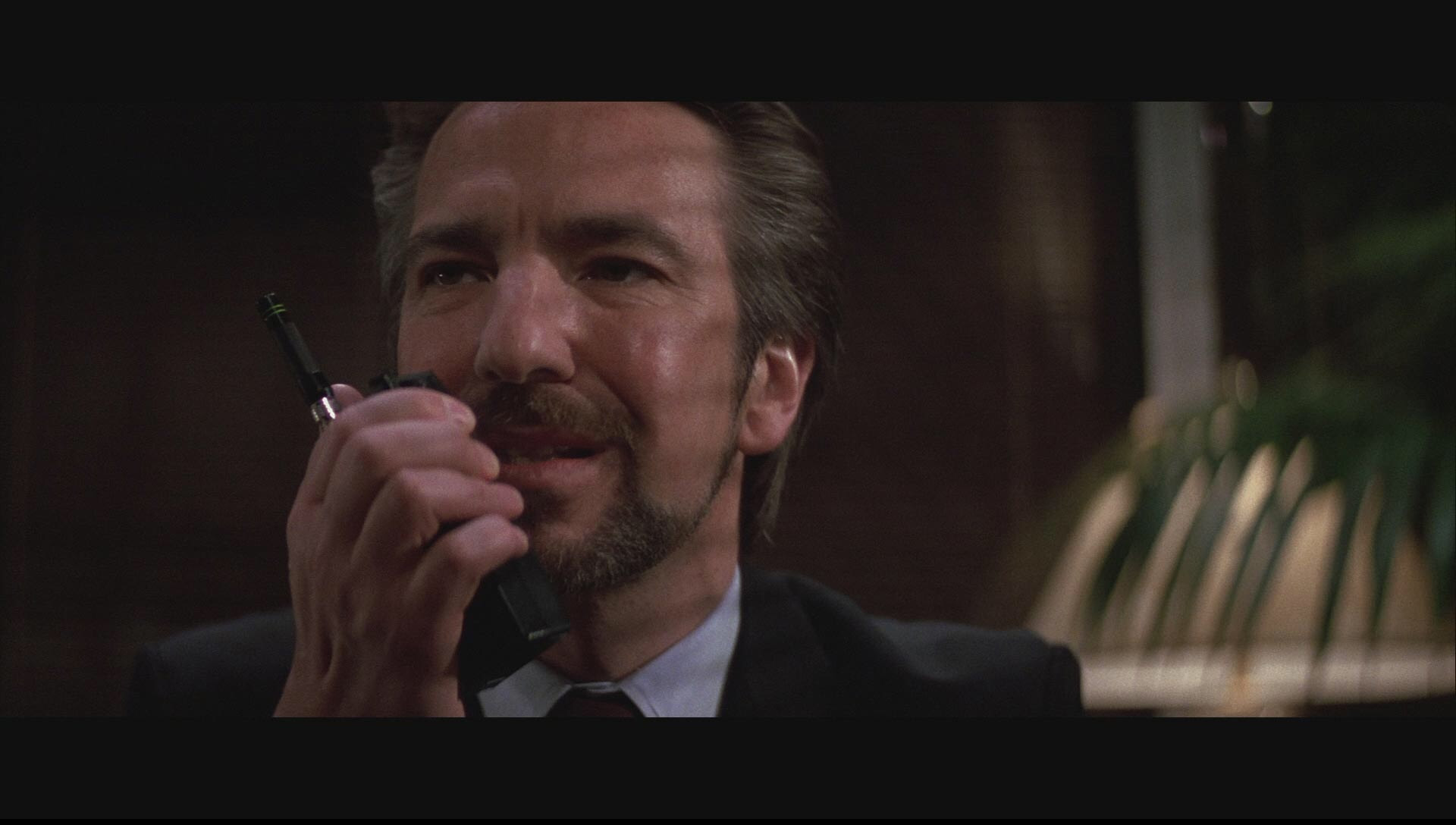 Insert a group of mostly one-note villains and, really you've got most of the big action movies of the 1980s. Here it's a bunch of eurotrash terrorists led by Alan Rickman's sleazy Hans Gruber. Aside from a few comments on (and perhaps some of the implication of) the company being specifically Japanese, like in Lethal Weapon, race is not much of a factor here. The helpful cop outside happens to be black, the limo driver happens to be black, the computer guy with the terrorists happens to be black... actually, that one could be somewhat progressive, giving the "intelligent" role to the black guy, the meathead muscle roles to white europeans.

There's certainly some comment being made about cultural interactions and big business in the late 80s here, but I won't get to that today.

(Unfortunately, some of the entries for this particular movie will necessarily be short because of the out-of-state speech tournament I'll be going to tomorrow. It's not as easy as when I was watching Groundhog Day and could get away with shorter entries now and then (even a few days in a row). With only seven days to cover a single movie, it would be nice to have more time, and have more research ready. Tomorrow, for example, I will be writing my entry late at night in Vegas, where we stop on the way to Salt Lake City. That entry will probably be short. I've got plenty to say without outside sources. I've managed before.)

Another commonality: Al Leong. He played Endo in Lethal Weapon, here he's Uli... probably better known as the electrocution guy in the former and the candy bar guy in the latter. Chinese American actor, born in St. Louis. Started his career as stuntman and actor with generic roles like "Vietnamese" in Twilight Zone: The Movie or "Tai-Chi Man" on an episode of Hart to Hart, "Bodyguard #2" on an episode of Magnum, P.I. and "Chow's Henchman," "Asian Looking Thug" and "Thus at Boat" on The A-Team...

Asian Looking... that's classy. Of course, Hollywood can barely tell one Asian "race" from another. Al Leong--again, he's of Chinese descent--was cast as Genghis Khan in Bill and Ted's Excellent Adventure. For those of you not paying attention, Genghis Khan was Mongolian. Well, technically, Kiyad, I guess--his father's tribe. But, you get my point. He was not Chinese. But, Hollywood doesn't care, nor did an 80s audience. He was Asian Looking enough to play Vietnamese, Mongolian, Japanese (he played "Yakuza Assassin" in Black Rain. He's played a lot of guards and thugs and henchmen.

In his own words (in a Vulture article, 16 July 2013), Leong says, "I'm not an actor. I'm a stunt person. And I've always been stuntman. I've never been an actor. I don't know what an actor does." Regarding the candy bar bit, he asked Director John McTiernan if it was okay to take one. "I always ask if I'm going to do something weird before I do it," Leong says.

Die Hard also shares Mary Ellen Trainor with Lethal Weapon. The psychologist in the latter, a reporter in the former. Typecast as a white woman.

(Apparently, her reporter character here--Gail Wallens--is the same reporter she plays in Ricochet a few years later. Not the same writer, director, or even casting director. Not sure how that happened... on further inspection, while the "story by" writers are different, the screenplay writer is the same for both--Steven E. de Souza.

But, I guess I should be reviewing the movie since it is Day 1.

I like that the reporter and the FBI are almost villains here in how they get in McClane's way. It makes this movie quite critical of the media and the authorities in how they jump on a situation without thinking things through. They're running jokes. Hell, as they're about to storm the building an hour in, one of the cops hits his hand on a rosebush and stops to say "ow." He's storming a building, holding a machine gun, but a thorn makes him pause. If that's not saying something...

And, the businessman who tries to "negotiate" with Hans--Harry Ellis (Hart Bochner)--he is almost sleazier than the actual bad guys.

Die Hard is so very American--like so many action movies. One lone guy can battle an army. How very Protestant Ethic.

Also pretty American: the biggest damage to the building is probably done by McClane, dropping the plastique down the elevator shaft.

What makes Die Hard really work is that the bad guy is bad, sure, but also quite entertaining. The protagonist is relatable, and supporting characters tend to be painted in nice strokes as well. Powell, Thornburg, Karl, Argyle, Theo, Harry, the police chief, Holly--they are all given enough material to make them interesting. Some in bad ways, some in good ways, but all interesting. And, it's an interesting bit of plotting that we are aware that this is a robbery pretty early on, even though McClane et al are not. That detail might have actually played... better if Gruber had not told Takagi why they needed the computer access. Give us a little mystery, make the power outage vault unlock moment into a twist. Yet, it plays just fine as it is.

Bad guys lose. Arrogant jackasses like the FBI guys or the reporter get theirs. And the couple at the center of the movie... well, the guy at the center and his wife--they are happily together in the end.

Plus, one more commonality--a secondary villain makes one last ditch attempt to kill our protagonist and gets shot.