i want some butts

On March 3, 1969 the United States Navy established an elite school for the top one percent of its pilots. Its purpose was to teach the lost art of aerial combat and to insure that the handful of men who graduated were the best fighter pilots in the world.

Today, the Navy calls it Fighter Weapons School. The flyers call it:

Well, first let’s nitpick. They actually call it Topgun. And, if the problem was too many pilots dying—as they mention in this film, shouldn’t you be putting, you know, every pilot through this schooling? It’s like some anti-Marxist, Protestant work ethic, pro-capitalist conspiracy—take the best, make ‘em even better.

Kinda sums up a great deal of the 1980s in America, actually. Look at Wall Street (or Wall Street), for example—a small bunch of guys trading all the money and getting rich off of everyone else. Greed is good and all that. The rich get richer and the poor get poorer while we’ve got our Navy boys patrolling the Indian Ocean because... reasons.

Anyway, I covered yesterday how this film worked quite effectively as a recruitment tool for the Navy (and probably the Air Force, as well, because the hormonal boys in the audience probably just saw planes and ran to the nearest recruitment center that had some). The question today, then, is if this movie is so pro-military, and young boys responded to it immensely, why is does it seem so, well, gay?

From locker room scenes to beach volleyball to the occasional bit of verbal innuendo (which I will try to mention as they come up), Top Gun could also function as a recruitment tool for the supposed homosexual conspiracy. And, I’m not trying to channel Quentin Tarantino here—hell, in that scene in Sleep with Me, Tarantino misquotes the final exchange between Iceman and Maverick anyway, taking it a bit too far with them talking about riding each other’s tails. The movie is about being a wingman, and so is that exchange. But, Tarantino makes some good points.

There is a lot of manflesh on display in this movie. For practical and realistic purposes, this movie has to be populated almost completely by men. That’s just the reality of the Fighter Weapons School in 1986.

Speaking of homoerotic innuendo, during the first lecture we see, Wolfman says, “This is giving me a hard-on.” Hollywood’s response: “Don’t tease me.” Nope, no implication of anything but a wholesome man-on-man relationship there... and, by wholesome I mean a strict friendship.

(By the way, one of the articles I looked at today—Braswell (2014)—makes the mistake of thinking the movie calls Goose Maverick’s “rear.” That is, in fact, a misheard innuendo. Goose is Maverick’s RIO (radar intercept officer).)

In that same initial lecture scene, take a look at how Iceman and Slider are sitting. A little close...

(On a literal level, there is, of course, no reason Iceman and Slider cannot actually be homosexual lovers as well as pilots, but I’m guessing the Navy would not let them fly in the same cockpit if they were... and it just occurred to me how sexist the word cockpit is.)

Right after this, Iceman, of course, comments on the big gender issue on display here when he says, “The plaque for the alternates is down in the ladies’ room.” Effectively, if you’re not the best, you might as well be a woman.

And, check out Goose and Maverick at the bar.

And, Sundown and... not sure which pilot that is. On the left, below.

It’s a common movie thing that two people having a conversation will often stand closer together than they really would in reality. But, some of the scenes in this film take it a little... well, not farther, but closer. Case in point the locker room exchange in which Iceman calls Maverick dangerous and Maverick pretty much takes it as a compliment.

Speaking of that bar, what is this movie telling us about gender when the pilots—all male—are there just to pick up women and our hero and his RIO actually make a bet about it. $20 if Maverick has carnal relations—”with a lady this time” because accidental homosexual sex is a punchline here—with a woman on the premises. He’s not looking for love or even a one night stand; he’s looking for sex right here, right now.

But, the next day he tells Charlie about how he was inverted on top of a male MiG pilot. He really knows how to turn on a girl. Well, she may be attracted to homosexual men, but Maverick really has no way to know that.

Does “Hard deck my ass” count?

“I want somebody’s butt, I want it now...” and the title for today’s entry.

Then, there’s the volleyball scene.

Gittell (2013) mistakenly says the volleyball scene involves pats on the butt. It does not. As we see in at least one other scene (I’m pretty sure) Goose and Maverick have their own version of a high five which swings right down into a low five. They are hitting each other’s hands twice, not dropping from a high five to each other’s butts. Whatever the content, all those shirtless men in the sand serves as foreplay to dinner at Charlie’s house. Except, this time there’s no consummation. In that Tarantino scene, he mentions how the next scene is the elevator scene, in which Charlie has a hat on and looks a little less like a woman. Thing is, that wasn’t planned. The scene was filmed after the movie was “finished” and McGillis’ hair had changed, so they hid it. Cruise has also changed his hair some, which is why he’s just out of the shower in that scene, to hide the change.

Insert some pause time, and now another locker room scene. And, have I mentioned how people are almost constantly wet in this movie? Fresh from a shower or drenched in sweat, the manflesh is so very wet and glistening. And, the locker room scenes remind me of this Calvin Klein ad from 1982: 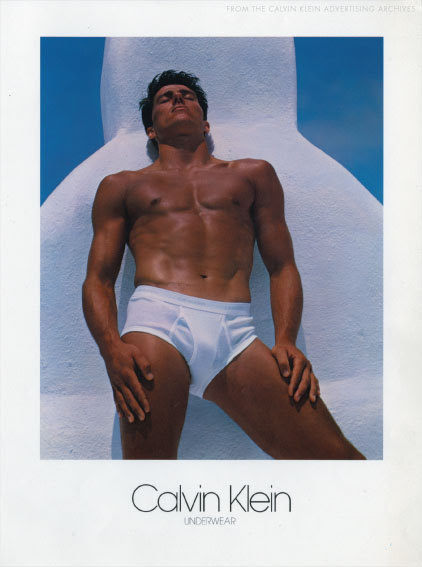 In the world of the homosexual conspiracy of Top Gun, I wonder what it means that Iceman’s “jet wash” is what leads to Goose’s death. Or that Maverick cradles a dead (or dying) Goose in his arms, and that leads to Maverick giving up on, well, being a man. He quits Topgun, which means his name goes on that plaque in the ladies’ room.

When Viper comes in to—well, I wouldn’t call it console—tell Maverick to get over Goose’s death, Maverick is in his underwear, and he’s shaving. Given all the hairless, shiny bodies on display in this film, I’m guessing he was shaving his chest right then, not his face.

And Wolfman gets a hard-on again, when the final battle gets underway. Because being a manly is exciting. Being manly is inherently sexualized.

In the end, Maverick learns to be a better wingman and he and Iceman embrace and all is well with the homoerotic world of Naval aviators.

Then, there’s the tacked-on ending in which Charlie shows up to be with Maverick again.

By sublimating young males’ hormone-induced sexual interests into an interest in military combat—by manipulating both the urge to be like these men and to be with these men—Top Gun twists an uncontrollable piece of a young man’s life into an urge for some serious control, flying a multi-million dollar aircraft while shooting down the bad guy. The competition between Maverick and Iceman may amount to a “taut, heated contest of eyefuckery and pursed-lipped looks of desire” (TK, 2013) but in the end, both turn out to be one and the same.

And, the very last shot before the end credits roll (after the initial cast credits, though): two fighter jets flying off into the sunset together. Iceman and Maverick perhaps?

Gittell, N. (2013, February 12). Why the homoeroticism in “Top Gun” matters [blog post]. Reel Change: a blog about movies and politics. Retrieved from http://reelchange.net/2013/02/12/why-the-homoeroticism-in-top-gun-matters/

TK. (2013, February 7). Top Gun review: One of life’s simple joys is playing with the boys. Pajiba. Retrieved from http://www.pajiba.com/film_reviews/top-gun-review-one-of-lifes-simple-joys-is-playing-with-the-boys.php