now, that is american workmanship

Commando begins with an execution in a suburban neighborhood. Cooke--AKA the black guy--and... the other guy gun down (presumably Lawson) from Matrix's old unit. Before we cut away, the dialogue from the car dealership scene starts. The dealer says today's title. He's talking about the car, but the timing suggests otherwise.

Another thing this movie shows us, but only so very briefly, as far as American workmanship goes, is home video pornography. Now, if you've seen the movie only once long ago, you might be wondering what I'm talking about. Picture it. Sunspot Motel. Matrix and Cindy are looking through Sully's stuff when Cooke arrives. Matrix tells Cindy to mess up the bed, which she immediately does even though he offers no explanation. He disappears momentarily to turn on the shower then returns to rip open Cindy's blouse. Not too sexist there, using her as a pawn to open the door. Then, Cooke comes in and fighting ensues. A little way into the fight, they break through the door to the room next door.

In that room: A guy and girl naked on a bed, the girl behind the guy. And, there's a tripod with video camera on it and what look to be a few sex toys on the TV and on the dresser. 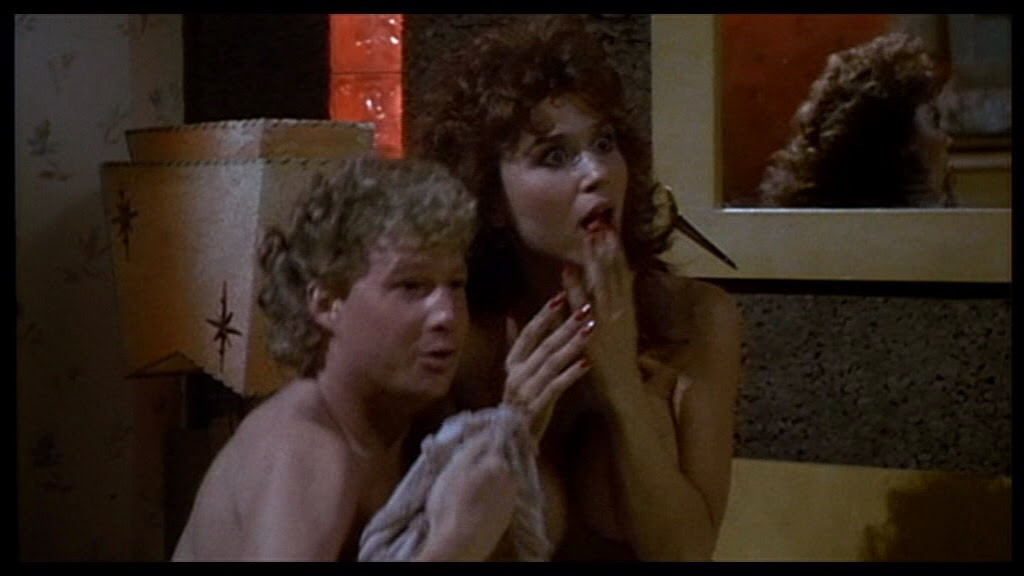 Does this have anything to do with the rest of the movie? No. It gets a pair of bare breasts briefly on the screen, helping the film to its R rating. And, if I wanted to drag this out, it suggests a certain misogyny to the film. Which is not at all surprising, considering the testosterone-fueled violence on display. To be fair, Jenny managing to escape on her own, plus Cindy being able to fly the plane when Matrix apparently cannot--these things suggest a counter to the testosterone, but only barely. Meanwhile, we've got random sex going on for no reason other than brief titillation. There is a guy in the bed, too. But, societal norms mean his chest is not as interesting as hers. His chest doesn't push the film toward an R rating.

It is, of course, worth noting that many an action film in the 80s was rated R. Films didn't deliberately tone down to get the PG-13 or PG. Adults (sometimes with children) were still the ones making most of the filmgoing decisions.

And, that is all for today.