(No, I'm not watching The Terminator.)

Three guys dead in the first four minutes, cut to a mysterious guy walking through the woods with a chainsaw. It's like a horror film until we see the comforting sight of Arnold Schwarzenegger's face. Then it gets really scary. I mean, what had he been at this point, anyway?

(Strange I-camera bit going on as his daughter sneaks up on him. He should've just turned the axe on her and saved himself a lot of trouble later... Was that callous? I can't tell. The Terminator was just feeding a deer on my screen. Nothing seems real right now. So, who cares about the life of Samantha Micelli?)

Hercules in New York--dubbed. The Villain, Conan the Barbarian and Conan the Destroyer, in which he can barely say some lines or emote properly, and The Terminator, in which he doesn't have to. Being Conan certainly made him hero material, but coming into this movie, I think I probably was hoping for something like The Terminator, some good action, some explosions, maybe a robot. Instead, there's some good action, some over-the-top action, and a whole lot of explosions, and Rae Dawn Chong. Not quite the same thing. Close, though; Chong's line readings occasionally come across as less than stellar.

(Considering that Commando is basically a prequel to Die Hard--and was cast by Jackie Burch, who also cast Die Hard and Die Hard 2--it makes sense that I discuss a few lingering details of that movie as I let this movie play out for Day 1.)

In theaters, when this movie came out, Back to the Future was still going strong, 4th place in its 14th weekend. Saw that one opening weekend at the General Cinema at the Santa Anita Fashion Park. That theater doesn't exist anymore and that mall has been made over to be a little less 1970s. Jagged Edge came out the same weekend as Commando and I'm fairly sure we saw both opening weekend, contributing to the #1 (Commando) and #2 (Jagged Edge) movies. The Chuck Norris-starring Invasion U.S.A. was in its 4th week, taking #5 (#3 was Agnes of God, which I'm not sure if I ever saw.). I don't think I'd see that until it was on video. Same with Pee Wee's Big Adventure, taking 6th in its 9th weekend--pretty sure I didn't see that one until it was on television, actually. Teen Wolf was in its 7th weekend and took 7th place. Probably saw that opening weekend. Same for The Journey of Natty Gann, #11 in its second weekend and Cocoon, #12 in its 16th weekend. The weekend after Commando, we'd go see Remo Williams: The Adventure Begins--and I still wish that had gotten the go ahead for a sequel. Then, there was a weird patch in which we probably didn't have much to see, so I'm sure we rented movies on the weekend. It doesn't look like we saw another movie in the theater--except maybe at the second run theater--until the weekend of November 22. Then we would see King Solomon's Mines and White Nights.

Anyway, there's some personal context. Oh, and I was in the 5th grade, private school.

(For example, Rick Ducommun (AKA Gus from Groundhog Day) is in Die Hard. Small part--he's the guy in the manhole who makes the phone call to get the power grid turned off--but he's there. I like to imagine that was Gus, after he had his knee injury that convinced him to quit the Navy but before he settled down in Punxsutawney.)

Details: John Matrix was in Laos when Jenny's mother died, i.e. when Jenny was born. Jenny is 12 (presumably, since Alyssa Milano was at the time), which means Matrix was in Laos during the end of the Vietnam War. He might have known General McCallister from Lethal Weapon or Martin Riggs, or those Air America guys played by Robert Downey, Jr. and Mel Gibson, or John Rambo.

Speaking of Rambo, Commando was filmed in April, May and June of 1985. Rambo: First Blood Part II came out in May. And, there is a guy in this movie (just a background guy, doesn't even have any real lines) whose outfit reminds me of Rambo. I wonder if it's on purpose.

(Meanwhile, in leftover Die Hard entry ideas, I think it must have been very awkward for both John and Holly after they got out of the building. And, I don't mean because of the magical marriage thing. I mean because, they come outside and John--

must all of these 80s heroes be named John?--

--hugs some black cop with some laughter and smiles that probably play pretty damn strangely out of context. Then, after the evil ballet dancer shows up again like a slasher film villain, Holly gets the opportunity to punch a news reporter. Does John know why she does this? Nope. Does he even ask? Apparently not. Maybe punching random reporters was always her thing back in New York.)

It's nice that this movie somewhat objectifies Arnold Schwarzenegger. I mean, from the closeup shots of body parts to introduce the guy to stripping him down to a speedo so he can have a nice Rambo-style suiting up montage. But then, it has to go and end with an obligatory implication of coupling up. Apparently John and Cindy never saw Speed--which makes sense, since it came out nearly a decade after this--or they would know that "relationships that star under intense circumstances... never last."

Backtracking, that shot of Matrix with the machine gun (right after he cuts the guy's arm off) screams, plus the sequence after, absolutely screams Rambo ripoff. 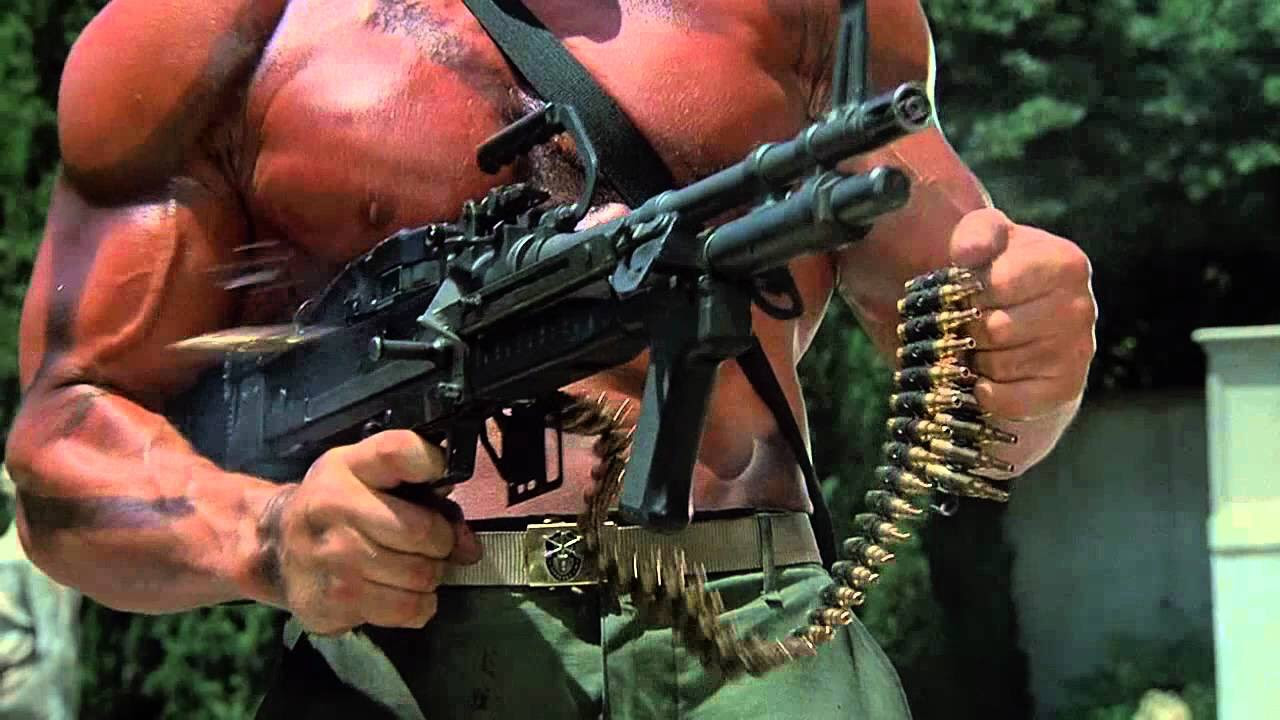 (Finally, in leftover Die Hard ideas, there's Argyle actually punching Theo because the actors didn't like each other much. There's also an unwritten treatise on racism--Orientalism, perhaps--in the metaphorical takeover of American business by a Japanese company, not to mention an interpretation as to why its euro trash criminals who take over said company... though it's quite obvious why a single American male saves the day.)

Imagine that last clause from the parenthetical here, and I will follow it with, I'll get back to that tomorrow.