I've critiqued Julie Ellen Benesh's (2011) doctoral dissertation before, for example in these entries:

Her dissertation, for new arrivals, is the only one I've found reference to online. The only dissertation relating to Groundhog Day that is. I figured there would be more (and Bob Hudgins said he thought there were) but I have yet to find evidence of as much. Anyway, her dissertation is called Becoming Punxsutawney Phil: Symbols and Metaphors of Transformation in Groundhog Day. Her abstract is simple enough: She tells us,

The 1993 romantic fantasy film Groundhog Day is considered to be an exemplar of the depiction of personal transformation. This study uses hermeneutics and a specific [Izod's Jungian] method of dreams interpretation to amplify images as symbols of transformation.

She watched the film only 8 times over the course of 2 months--for which I've already called her a lightweight, I believe--and only collected 47 screencaps. I had intended to systematically go through all of the tabs I stuck on my printout of her dissertation and all of my handwritten notes. Instead, I did a few entries then got sidetracked by Woodstock and by planned entries for February 12th (the release date for the film) and March 2nd (Oscar day, hence the entry about awards), and of course by the death of Harold Ramis. I had a sense--

(I think I may have made this point in the blog before, but I am not actually sure. I know it's something I told the reporter from New York, and I've mentioned to a few people who follow, at least loosely, this blog.)

--that the first half of this blog would be mostly within the film. That is, I would be dealing primarily with content. There were not a lot of actor profiles even though those seemed like gimmes early on. There were not entries about box office--

(There were the 1 2 3 TV Time Loop Days, of course, and entries about The Butterfly Effect and The 12 Dates of Christmas and Repeaters and Sure Thing and probably some other outside stuff I'm not recalling at present. But, note I said mostly.)

--and while there were entries about the filming locations, the more recent Woodstock stuff puts any of those early location entries to shame. The necessarily implied thing about the second half of this blog is that it would be mostly without the film. That is, I expect to deal with material beyond the scope of the film itself. Woodstock, Harold Ramis. I'll get more into Bill Murray and other actors. I expect to deal with some more time loop films (and more time loop TV shows if I discover more--I figure I won't get to the likes of Day Break or Tru Calling until I've got more time, maybe not until summer) and there will always be room to comment on what's within the film. For example, Rita is dreaming a bit big if she thinks she can be a big enough producer in only five years that she can produce what she wants to produce (which seems to be the news) while living at high altitudes in the mountains--it's date night on my television right now and Phil just spoke French.

Anyway, before I get too far outside Groundhog Day, and as a sort of transitional element, I figured I should get back to Benesh. And, I should be more systematic about it, just run through my notes and tabs from start to finish. If you don't know what I mean by tabs... 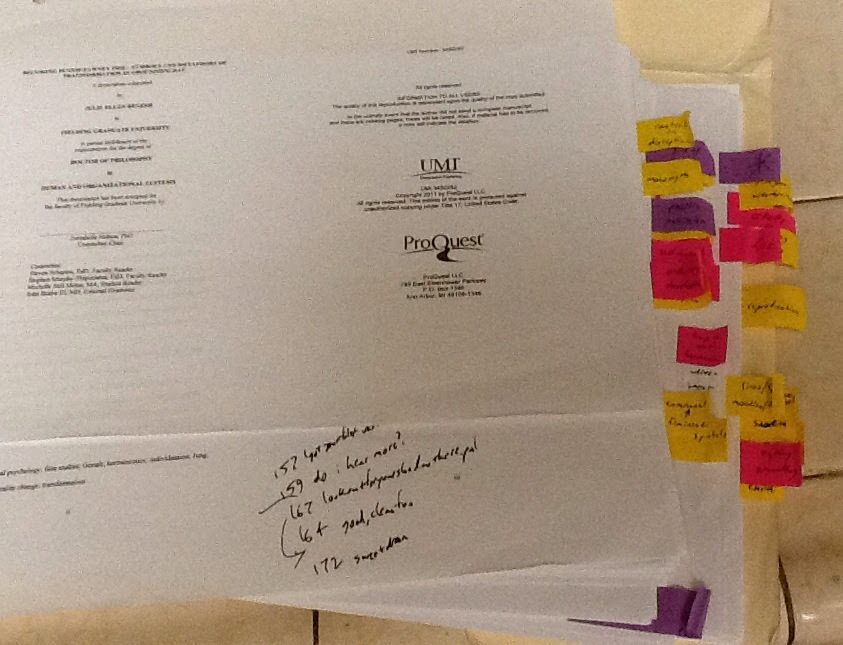 Before I get to Benesh, though, there's something I should mention about my own study again, I suppose. I currently plan to finish my Master's program next spring. I currently plan to write a thesis directly linked to Groundhog Day. While I wrote a prospectus for doing the Cinematic Christ-Figure study, which would use Groundhog Day as one major example, and while I wrote a proposal for a study about testing confirmation bias in religious audiences by showing them Groundhog Day and handing out questionnaires afterward, I don't think either of those things will be my topic. I've mentioned before--and I still like the idea--that my topic may have something, or everything, to do with the representation of gender (and gender roles) in Groundhog Day. The hard part is justifying choosing this particular film, more than two decades old, a my case study. Obviously, I've got my personal reasons; I mean, if I'm to become (if I haven't already) the foremost expert on Groundhog Day then I ought to be allowed to write about it and get some official credit for it. I've already written hundreds of pages on the subject of Groundhog Day without such credit. Hell, in the thesis itself, I will mention this project. My current thinking is that I will justify the objective choice of this particular film by citing, like Benesh does, it as an "exemplar" but not of "the depiction of personal transformation" (though it is that), rather as an "exemplar" of male-female relations, particular the way we represent them on the big screen, as an "exemplar" of the division between masculine and feminine ideologies, masculine and feminine quests, as a deconstruction of the romantic comedy by way of fantasy. There are plenty of sources I've got that talk about how important this film was and is, about what it represents as far as comedic film and romantic film. So, I could be objective before I also explain that I've put in all of this time studying the film and have a personal investment in not only exploring its content in a formal capacity but in perpetuating its place of importance by writing about it one more time. Keep in mind, the thesis writing will come some time after the completion of this project.

Anyway, Phil's speech to sleeping Rita is on and it's starting to mean something to me again, which is cool. And, I'm past 1100 words already today and haven't even gotten past the first paragraph of Benesh's abstract. I expect this critique may take a while. But, I'm game. And, I think it is a necessary step in what this project is, was and will be.

Today's reason to repeat a day forever: to critique every individual piece I've written about Groundhog Day... and then critique those critiques... and those.